The Fed offers a shot of 50 bps, and quantitative tightening to cool strong labor markets

The Fed delivered a widely anticipated 50 bps rate hike on May 4th while also introducing its plan for quantitative tightening. The Fed Funds Rate increased from a range of 0.25%-0.50% to a new range of 0.75%- 1.00%. There were no surprises with their stated QT plan in which they will allow $30B of Treasuries to roll off for the first three months along with $17.5B in MBS. Those amounts will double after three months. It is important to note that the value of MBS maturing each month is in the $20B range, so the overall Fed balance sheet roll-off will likely fall short of their stated $95B/month target. The Fed did not mention anything about outright sales of Treasuries or MBS. While Chairman Powell took a 75 bps hike off the table, he did indicate that several 50 bps moves may be necessary along with some 25 bps ones. The Fed expects the Fed Funds Rate to end 2022 at a range of 2.50-2.75%. We continue to believe the Fed will take a more patient/methodical approach based on underlying data. Inflation will likely come down and the Fed will not need to raise rates as much as expected.

Hiring surged again in April with 428,000 new jobs added to the U.S. economy. The unemployment rate held steady at 3.6% and the gains in employment were widespread. The labor participation rate fell by 0.2% to 62.2%, led by the shrinking of the labor force by 363,000. Average hourly earnings increased by a slightly more modest 0.3% m/m last month, but upward revisions to the gains in earlier months mean that the annual rate of earnings growth only edged down to 5.5%, from 5.6%. By any measure, labor market conditions are tight, which is driving wages higher. 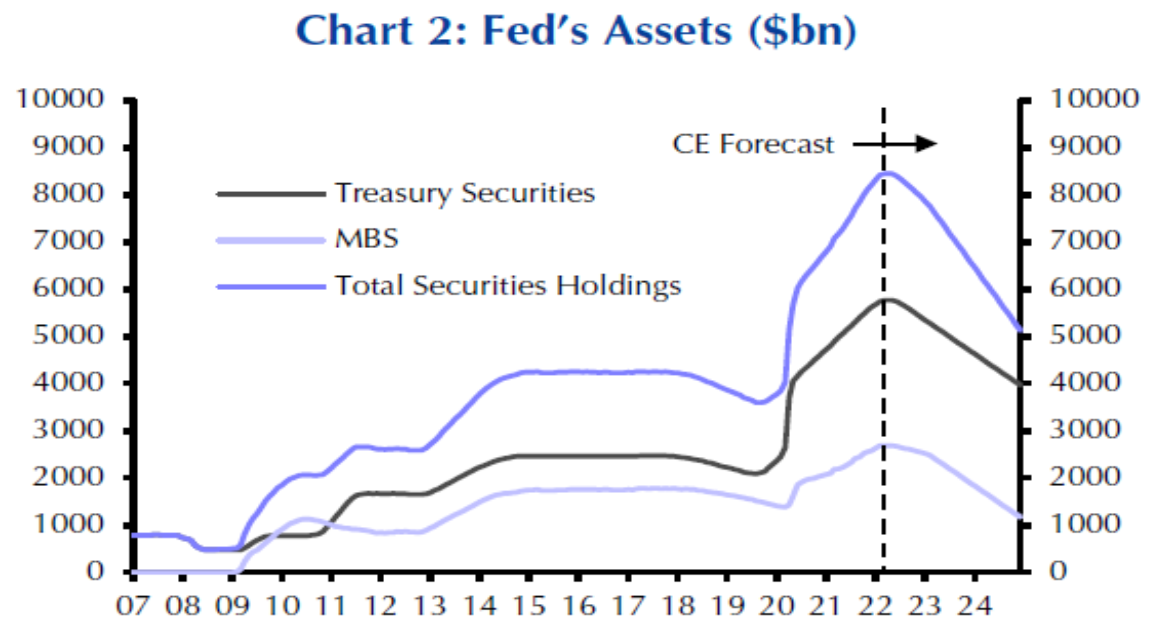 Q1 GDP contracts along with PMI’s

U.S. GDP unexpectedly fell 1.4% in Q1 2022, down sharply from the 7% growth rate reported at the end of 2021. Net exports subtracted 3.2 percentage points from GDP growth, with inventories subtracting an additional 0.8 points. Exports fell by 5.9% annualized while imports increased by 17.7%. The negative contribution from inventories was inevitable after stock building added 5.3% to growth in Q4. The other source of weakness in the first quarter was the public sector, as government expenditures fell by 2.7%. Positive components of the report included business spending that grew 9.2% and consumer spending which rose 2.7%. The underlying components of the report were solid, but investors should expect volatile inventory and trade numbers moving forward given the state of supply chains and COVID restrictions in key export countries like China. Expectations are currently for 2-2.5% growth in Q2 and 2-3% growth for the full year.

The decline in the ISM manufacturing index to a 20-month low of 55.4 in April was mostly due to weakening demand amid a broader slowdown in global manufacturing rather than a renewed supply crunch. A sharp drop in the employment index to 50.6, from 56.3, was responsible for most of the fall in the headline index. New orders and production softened a bit. The ISM Services PMI fell to 57.1 in April from 58.3 in March. Production strengthened, but new orders and employment weakened.

Despite sharp losses, Q1 EPS have been solid

Markets have sold off YTD, but Q1 earnings have outperformed expectations. Q1 S&P 500 earnings have grown 9.1%, double the 4.6% expectation entering the quarter. 79% of S&P 500 companies have reported a positive EPS surprise and 74% of S&P 500 companies have reported a positive revenue surprise. The S&P 500 currently trades at about 17.5x on a forward basis, slightly above its 10-year average of 16.9x. Earnings are forecast to grow 10.1% in 2022.

How long can the eurozone economy outperform the U.S.?

The eurozone economy grew 0.2% Q/Q in Q1 2022, down slightly from the 0.3% rate reported in Q4 2021. The Y/Y growth rates were positive for all countries. Eurozone economic growth accelerated in April as a rebounding service sector, benefitting from loosened COVID-19 restrictions, helped compensate for a near stalling of manufacturing output. The flash eurozone composite PMI rose from 54.9 in March to 55.8 in April. The services component hit an eight-month high while the manufacturing component fell to a 15-month low. Inflation also continues to be a major problem that could start to impact consumer spending and the service sector. 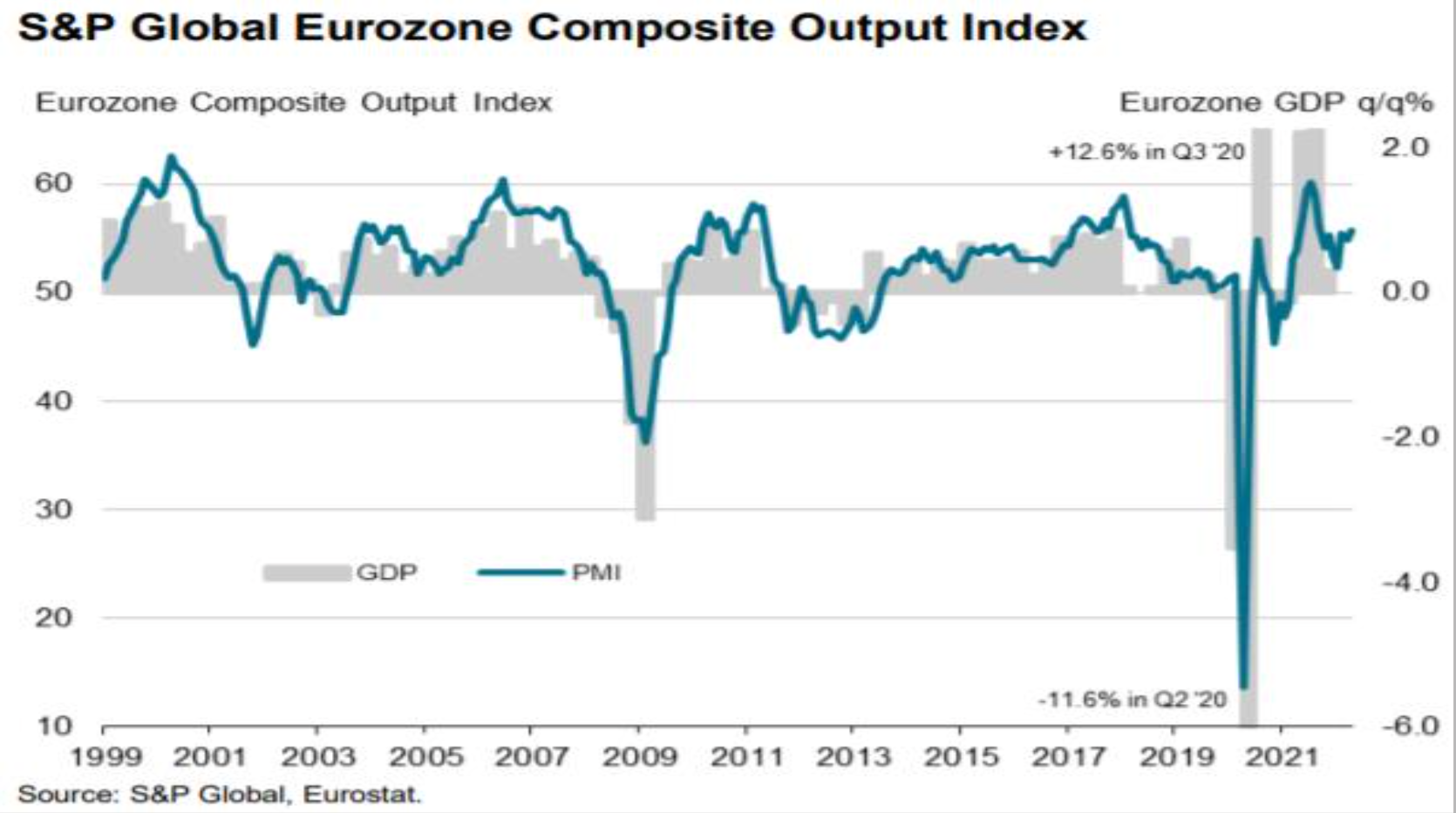 China’s Q1 GDP shows growth, but what will the impact be from their zero tolerance COVID policy?

China’s economy grew at an annualized clip of 4.8% in Q1, slightly ahead of the 4.4% estimate but down from 2021’s rate. Fixed asset investment for the first quarter rose by 9.3% from a year ago, above expectations. Investment in manufacturing rose by 15.6% in the first quarter from a year ago, and infrastructure saw an 8.5% increase. Retail sales in March fell by a more-than-expected 3.5% Y/Y. With Shanghai and Beijing facing harsh COVID lockdowns/restrictions, China’s economic picture likely worsened in April. Further, the unemployment rate across the country and particularly in large cities continues to rise. Real estate investment also continues to decline, causing an economic headwind after years of providing a tailwind.

Unlike the rest of the globe China is easing monetary policy to support growth while the government implements its zero tolerance COVID policy. As consumers and the real estate sector are challenged, the government will be forced to provide its more traditional set of stimulus tools in the form of infrastructure spending. This does not bode well for an economy looking to transition from manufacturing to services. China’s economy is clearly slowing and struggling with its COVID policy. As the world’s second largest economy, its impact on the global economy is significant. This is especially true for global supply chains that remain severely challenged. As long as major population and production centers are offline in China, supply chain issues should continue. The Caixin China Manufacturing PMI fell to a 26-month low of 46.0 in April of 2022 from March’s reading of 48.1. The Caixin China Services PMI plunged to 36.3 in April 2022 from 42.0 in March, the second consecutive month in contraction territory. The official Non- Manufacturing PMI for China sank to 41.9 in April of 2022 from March’s reading of 48.4. The official manufacturing PMI fell to 47.4 in April from 49.5 in March. 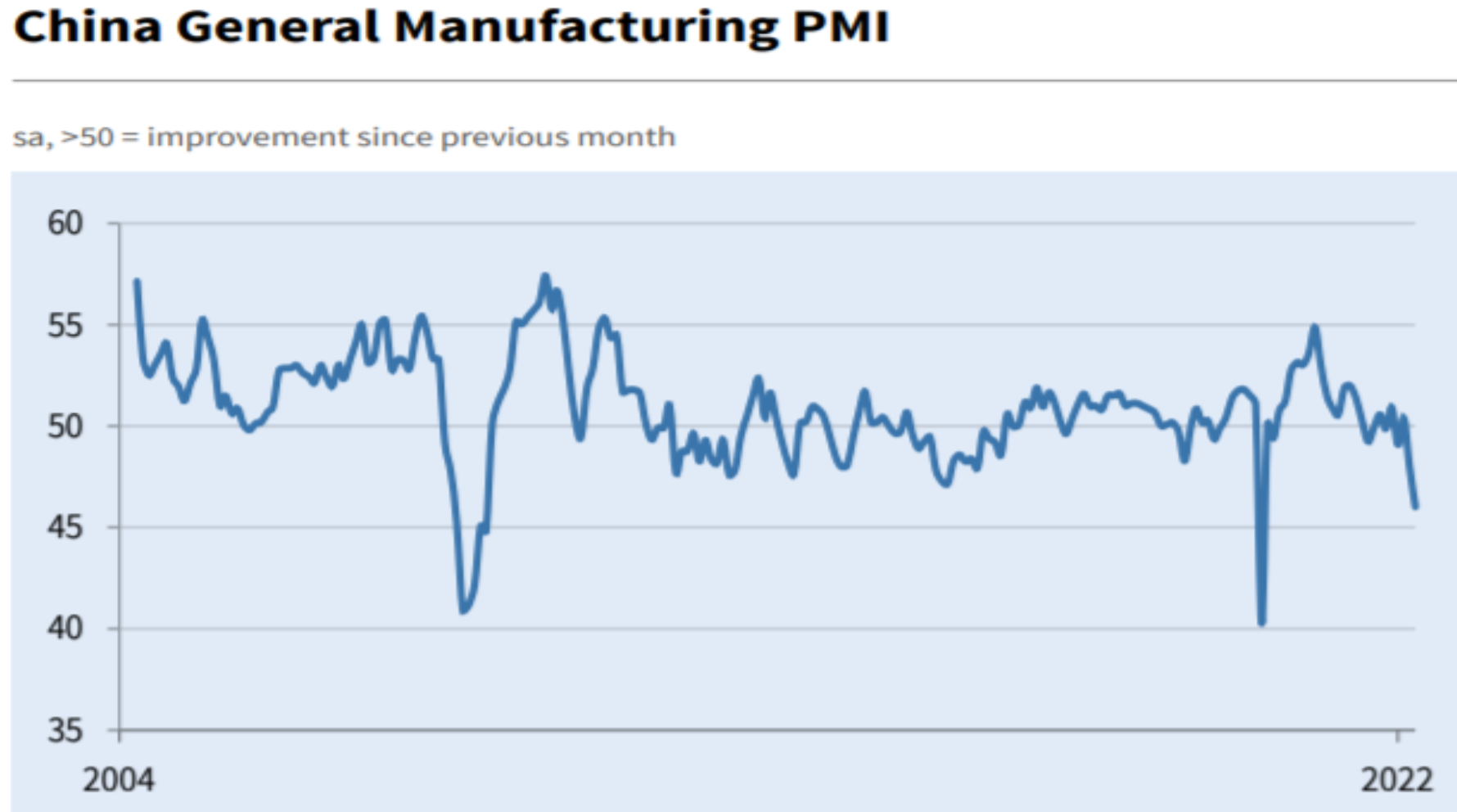