The consumer and strong labor markets are supporting the U.S. economy

Employers added 196,000 new jobs to the U.S. economy in March, ahead of expectations with an upward revision to the weak February report. The unemployment rate held steady at 3.8% and wages grew 3.2%, down from last month’s rate of 3.4%. It was a goldilocks report because job gains were solid, but wage growth cooled off a bit. By most accounts, employment and the consumer appear to be in solid shape and this is crucial as consumer spending accounts for 70% of the U.S. economy. Economic growth moderated to 2.2% in Q4, but economists expect a slowdown in Q1 with most estimates in the range of 1-1.5%. The Atlanta Fed’s GDP Now Q1 estimate has actually surged higher in recent days to 2.3%.U.S. retail sales fell 0.2% in February after rising an upwardly revised 0.7% in January. They have also increased at a healthy 2.2% clip Y/Y. Core retail sales declined 0.2% after surging 1.7% in January. Auto and gas stations posted gains last month while sales fell at building materials stores, clothing stores, food and beverage stores and electronics and appliance stores.

Corporate America has lost some momentum, but data may have nally turned the corner with upbeat readings in April

The manufacturing sector showed a stronger rate of growth/activity in Q1 led by improvements in new orders, production and employment. The ISM Manufacturing Index increased from 54.2 in February to 55.3 in March with many respondents indicating that orders remain quite strong. The U.S. services sector weakened in Q1 due to softness in new orders and business activity/producton. Services did slow, but importantly from a high star ting point. The ISM Non Manufacturing Index slid from 59.7 in February to 56.1 in March. Many businesses cited labor shortages as their primary concern. Both PMIs remain at very healthy levels and suggest the U.S. economy con nues to grow at a solid pace.Durable goods orders were weak in February although most of the decline was related to transportation on/aircraft orders that fell 4.8%. Orders for non-defense capital goods 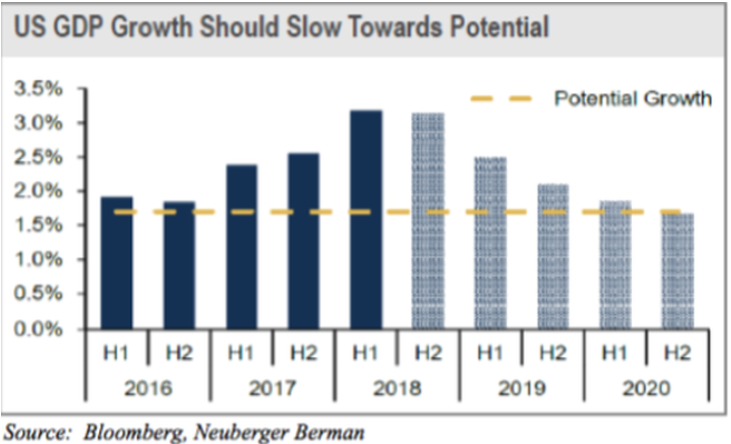 excluding aircraft , a closely watched proxy for business spending plans, fell 0.1%, pulled down by declining demand for machinery and computers and electronic products. While the consumer picture looks healthy and supportive of U.S. economic growth, Corporate America looks a little more challenged based on recent data points. The economy has lost some momentum versus 2018, but we don’t believe a recession is likely in the near-term and we are encouraged by a pickup in April data.

Muted inflation should provide room for the Fed to maneuver

Inflation continues to be very muted across the globe. U.S. CPI rose to 1.9% in March from a 2 1/2 year low of 1.5% in February. The March reading was slightly above market consensus of 1.8%. An increase in food prices really drove the headline number gains, but when excluding this volatile segment (and energy), Core CPI fell to an annualized rate of 2% in March, from 2.1% in February. The latest reading on PCE Core Inflation showed an increase of 1.8% Y/Y. By all accounts, in a on remains below target levels in the U.S. and that should provide a lot of monetary policy exibility for the Fed. The dovish Fed cut their rate hike forecast for 2019 from two to zero and they plan to end the balance sheet runoff in September.

Europe is a mess and Germany is likely heading for a recession later this year; ECB is forced to reignite its QE program

Europe continues to be a mess with lackluster inflation and economic growth that is likely to fall below 1% in 2019. Germany, the European growth engine, may be heading towards a recession later this year and Brexit uncertainty remains a major headwind. Eurozone PMIs continue to decline, highlighting the structural flaws of the region. March’s Composite PMI fell to 51.6 from 51.9 in February, led by weakness in manufacturing. Germany’s PMI hit a 69-month low. At current levels, the PMI remains consistent with GDP rising by only 0.2% in Q1, but unless manufacturing pulls out of its downturn the overall pace of economic growth will likely weaken in Q2 as the malaise spreads to the service sector. The ECB attempted to end its QE program in 2018 despite deteriorating growth, but they have been forced to reignite bond buying to stimulate growth and inflation across the troubled monetary union. 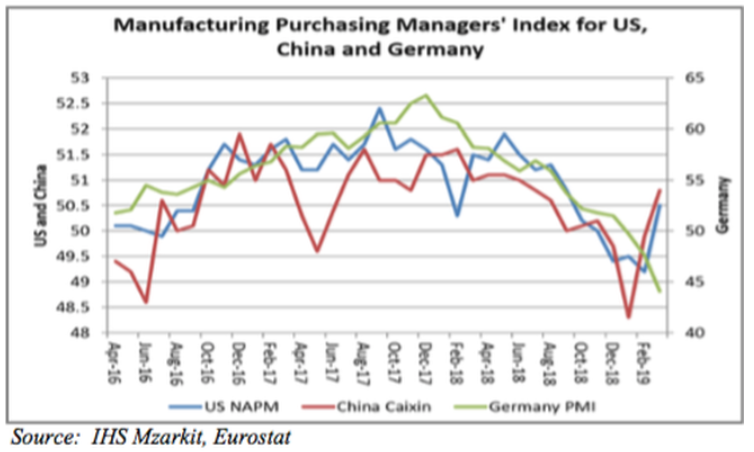 Japan’s economy expanded in Q4, but uncertainty persists over the sustainability of growth despite early signs of progress with structural reforms

Japan’s economy returned to growth in Q4 (+0.5% Q/Q), but that follows a contraction in the previous quarter. The BOJ continues to pump massive amounts of stimulus into the economy, but it has failed to achieve its goal of providing sustained growth and inflation. We believe demographics are a major headwind for Japan’s economy. Trade tensions between the U.S. and China have impacted global trade, especially across Asia. Japan is a major exporter so any resolution should be positive for the economy and corporate fundamentals. Japan’s economy has averaged 1.3% growth since 2012 and there are early signs of positive structural reform developments. Labor markets are very ght in Japan and wages have begun to rise. Women’s labor-force participation on has been steadily rising. The World Bank esti mates the women’s labor-force participation on increased to 51% in 2017 from 48% in 2012.

Are we finally seeing green shoots in China?

After months of declining economic data in China, manufacturing PMIs unexpectedly expanded in March. The Caixin/Markit Manufacturing PMI came in at 50.8 for March, ahead of the 49.9 es mate and reading from February. China’s official state sponsored manufacturing PMI came in at 50.5 in March, up from February’s 3-year low of 49.2. These were the first expansions in the manufacturing sector in four months and may be the first signs of stabilization in the Chinese economy. The PBOC has provided targeted stimulus through tax cuts, liquidity injections and cuts to the important Reserve Requirement Ratio. The deterioraton in Chinese growth has likely helped spur positive trade developments with the U.S. While there has been no formal agreement, both sides appear to be motivated to find a resolution.Activity in China’s services sector picked up to a 14-month high in March as demand improved at home and abroad. The Caixin/Markit services purchasing managers’ index (PMI) rose to 54.4, the highest since January 2018 and up from February’s 51.1, a four month low. These results were consistent with the official non-manufacturing PMI that showed a pickup in services activity in March. Construction, in particular, showed strength, likely reflecting government efforts to fast-track more infrastructure projects to kindle domestic demand.China’s consumer/services sector has definitely supported the economy while manufacturing has slumped. More evidence of a rebound is necessary, but the uptick in PMIs is certainly welcome news for the country and global economy. The business community (sentiment) con tinues to be cautious given the ongoing trade dispute with the U.S. and inflation remains fairly subdued. CPI rose 2.3% in March, its fastest pace since October 2018 and producer prices increased for the first time in 9 months. 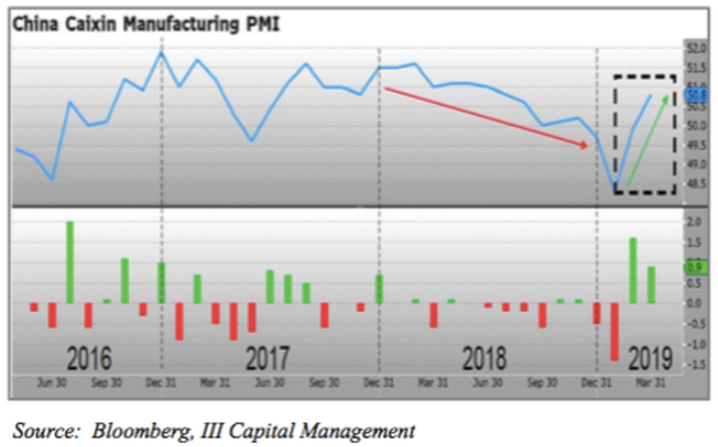