Are the U.S. & China on a trade war collision course?

Talk of protectionism, tariffs and trade wars has really heated up in recent weeks and the increased uncertain-ty has sent volatility higher and financial markets lower. Trump announced the steel tariffs on March 9th and after a period of calm, the rhetoric heated up again in early April with a sort of tit for tat battle between the U.S. and China. The U.S. has threatened $150B of tariffs on Chinese goods (steel, aerospace, machinery and medical industries) while China responded with $50B (106 products) that includes agricultural goods such as soybeans along with certain aircraft and automobiles. The developments are a concern, but we believe fiscal stimulus should more than offset any negative impact.

Earnings are projected to grow 17% in Q1 and that would be the highest level of growth since Q1’11. EPS growth has been revised higher from 11% expected at the start of Q1. Revenues are forecast to grow 7.3% in Q1 and a record number of S&P 500 companies have issued positive guidance led by the tech sector. Earnings are projected to grow 19.4% in 2018 and that should be more than sufficient to support the current forward P/E of 16.5x.

Are we seeing another year of first quarter weakness?

The March employment report was weaker than expected with soft job growth and little sign of rising wag-es. Employers added 103,000 new jobs to the economy and this was below the 195,000 estimate. The unemployment rate held steady at 4.1% and average hourly earnings ticked up to a healthy 2.7% annual rate. January’s report was revised lower while the February read-ing was revised modestly higher. Weather disruptions in the Northeast likely played a role in the weak headline numbers, but wage growth has failed to move much higher from the 2.5% level witnessed over the past few years. The household survey pointed to significant part-time job gains versus a decline in the number of full-time jobs. 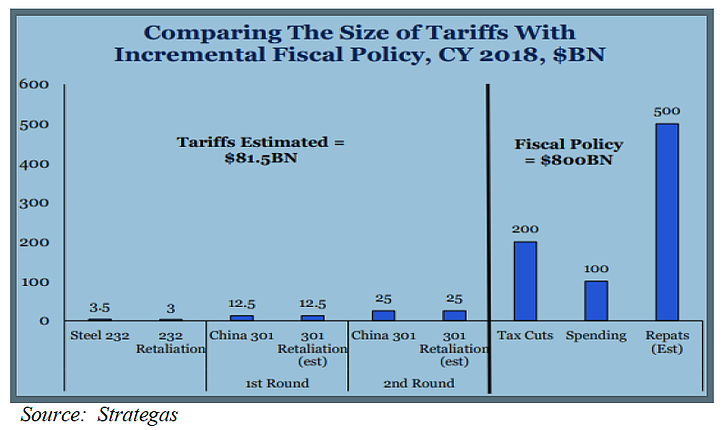 The Fed hiked rates for the 6th time at its March meeting and upgraded its expectations for the economy. They expect two additional rate hikes in 2018 and a gradual path higher in 2019 and 2020 towards the 3% level. There were no real surprises from this meeting although any expected pickup in inflation could lead to a more hawkish Fed that is forced to raise rates more aggressively. March CPI advanced 2.4% Y/Y with core CPI rising 2.1%. PCE inflation sits below the Fed’s 2% target, but should rise as unusual factors like weak wireless cell prices roll off.

The ISM Manufacturing Index fell in March to 59.3 from February’s reading of 60.8. New orders, employment and production all softened, but the manufacturing sector continues to sit at very healthy levels despite the March de-cline. Survey respondents cited concern over the impact of tariffs, but manufacturing continues to benefit from strong global growth and the weaker U.S. dollar. 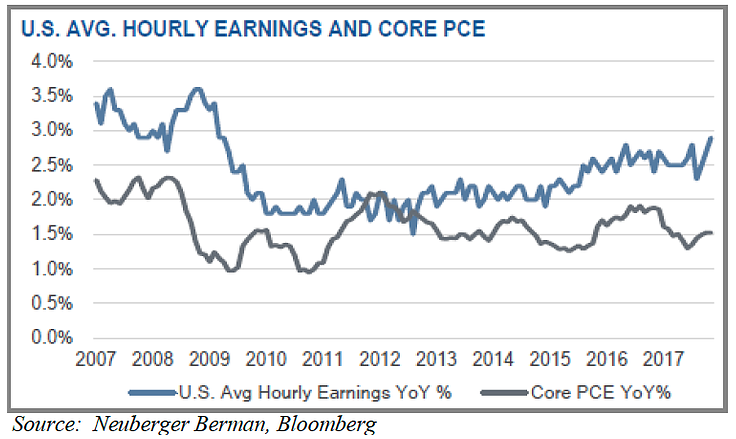 The U.S. service sector softened in March for the second straight month. The ISM NMI Index fell from 59.5 in February to 58.8 in March. Although the index fell in March, it sits well above the 50 level that separates expansion from con-traction. The service sector has expanded for 98 straight months and the March weakness was largely due to a decline in new orders. Most economic data weakened in Q1, but it is important to remember that many data points sit near their post financial crisis highs.

U.S. retail sales showed a slowing economic picture based on the third consecutive monthly decline. Retail sales fell 0.1% in February after declining 0.1% in January. This marked the first time since April 2012 that retail sales have fallen for three straight months. Core retail sales rose 0.1% and this is important because they correspond most closely with the consumer spending component of GDP (+3.8% in Q4). Consumer spending continues to be supported by tight labor market conditions, the strong global economy and tax cuts that have begun to impact paychecks. Q4 GDP of 2.9% was nearly the third straight quarter of 3%+ growth. 3% growth is expected in 2018, but Q1 will likely only come in at 2-2.5%.

New home sales dropped 0.6% to a seasonally-adjusted annual rate of 618,000 units in February after January’s sales pace was revised higher. Economists expected new home sales to rise 4%, but the 17.6% decline in the West region and the 3.7% fall in the Midwest region took care of that. A shortage of new lower priced homes continues to plague the housing market and rising mortgage rates have negatively impacted affordability. Existing home sales rose 3% in February after falling the previous two months.

Eurozone economic activity saw steady gains in 2017, but the pace of growth has moderated in 2018. The eurozone composite PMI declined from 57.1 in February to 55.2 in March (lowest since start of 2017). Manufacturing and services both slowed and output growth in key countries also showed a slower pace of expansion. Based on recent data, the eurozone appears to have slowed a bit from the strong and unsustainable pace of growth experienced over the past few months. Current PMIs suggest that the economy expanded 0.6% in Q1 and that would be consistent with solid 2.5% growth in 2018.

Eurozone unemployment fell to its lowest level since December 2008 at 8.5%. Unemployment has fallen sharply over the past few years as the region has finally reaped the benefits from negative interest rates, quantitative easing and a strong global economy. In a separate report, eurozone CPI rose 1.4% Y/Y in March and this was up from 1.1% in February. Core inflation held steady at 1% Y/Y, slightly below the 1.1% estimate. The ECB expects inflation to pick up throughout 2018, but core inflation remains stubbornly low and this should allow them to be patient with monetary policy normalization. 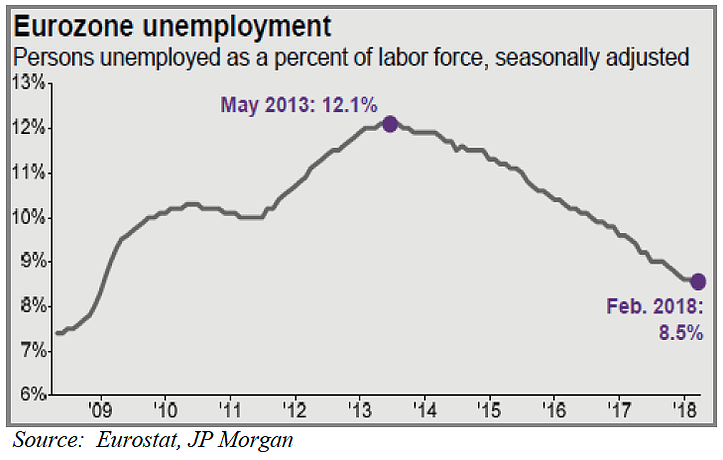