Are we in a recession and does it matter?

One of the big debates on Wall Street going right now is whether the US economy, based on Q2 gross domestic product (GDP) data, will show a recession.  However, as investors, it may be more important to focus on other indicators like consumer sentiment.

On the one hand, most economists believe that two consecutive quarters of contracting gross domestic product means the economy is in a recession.  There are firms like Moody’s Investors Services who provide an advance estimate of U.S. Q2 GDP in late July, and project a recession.  According to them:  “Among key data coming will be second-quarter GDP, which our high-frequency GDP model shows is on track to fall 1% at an annualized rate. Before the advance estimate, some additional source data will be released, but it remains likely that GDP fell for a second consecutive quarter.  The GDP weakness so far this year has been attributed to volatile and often mean-reverting components—net trade and inventories—while domestic final sales and gross domestic income have held up noticeably better.

GDP is only one of many variables that the National Bureau of Economic Research (NBER), the de facto arbiter of U.S. recessions, uses to define a recession as a “significant decline in economic activity spread across the economy, lasting more than a few months, normally visible in production, employment, real income and other indicators.”

On the other hand, US Treasury Secretary Janet Yellen recently said that “the U.S. isn’t in a recession given the strong labor market and strong consumer spending trends, even as economists brace for 2nd quarter economic output data to be released later this week.”  While that could be one of the outcomes when the preliminary data for second quarter GDP is released Thursday by the Bureau of Economic Analysis, the expectation is for growth of 1.6% after a first quarter contraction of 1.6%.  “The economy is slowing down…but this isn’t an economy that’s in recession,” Yellen said on Sunday July 24, 2022.  “We’re in a period of transition in which growth is slowing, and that’s necessary and appropriate, and we need to be growing at a steady and sustainable pace,” she said. “You don’t see any of the signs. A recession is a broad-based contraction that affects many sectors of the economy. We just don’t have that,” Yellen added.  She acknowledges that inflation remains “too high” but expects the Fed’s actions will help bring inflation down.  US executive branch actions will also help bring energy prices down by releasing oil from the Strategic Petroleum Reserve.

A second quarter of negative GDP could give the Federal Reserve cover to not raise rates as quickly as currently expected. Correlation with future equity returns is less clear.  Historically, valuations and behavioral predictors like consumer sentiment have been better predictors of future returns.   While we understand that it can be difficult, we recommend that investors heed Warren Buffett’s advice to be “fearful when others are greedy, and greedy when others are fearful.”

We advise investors to stay invested and stick to their long-term allocations as we work through this period of higher inflation and volatility. 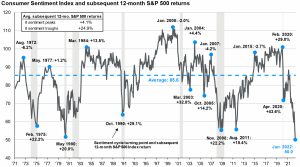