U.S. economic growth accelerated in Q2 to an annualized rate of 2.6% (2.7% estimate), up from 1.2% in Q1. Consumer spending rebounded in Q2 with growth of 2.8%, but this was offset by lower business spending. Business spending increased just 2.2% in Q2, down from the 8.1% annualized pace in Q1. Trade was a boost during Q2 along with federal government spending, but housing and inventories detracted slightly from Q2 growth. 2015 economic growth was revised higher to 2.9% while 2016 growth was revised lower to 1.5%. Core PCE, the Fed’s favorite inflation measure, fell in Q2 from 1.8% to 0.9%. Inflation rose less than expected in July as CPI increased 0.1% versus the 0.2% expectation. Core CPI also rose 0.1% last month and both inflation gauges have risen 1.7% Y/Y. New vehicle prices fell 0.5%, cell phone costs declined 0.3% and lodging dropped 4.2%.

The Fed left rates unchanged at its July meeting, citing falling inflation as a concern. They are monitoring inflation closely and several members of the committee have grown concerned over the decline since February. An additional rate hike this year may now be off the table given the weakening inflation picture which has left CPI and PCE well below the Fed’s 2% target. The only other notable development was that the Fed expects to begin shrinking its balance sheet “relatively soon”.

Consumer confidence surged in July, hitting a 16-year high of 121.1. Economists expected consumer confidence to drop to 116.5 in July, but consumer’s assessment of current economic/labor market conditions improved along with their short-term outlook. Consumer sentiment dipped slightly in July from 95.1 to 93.4. The current conditions component gained ground while the future expectations component weakened. 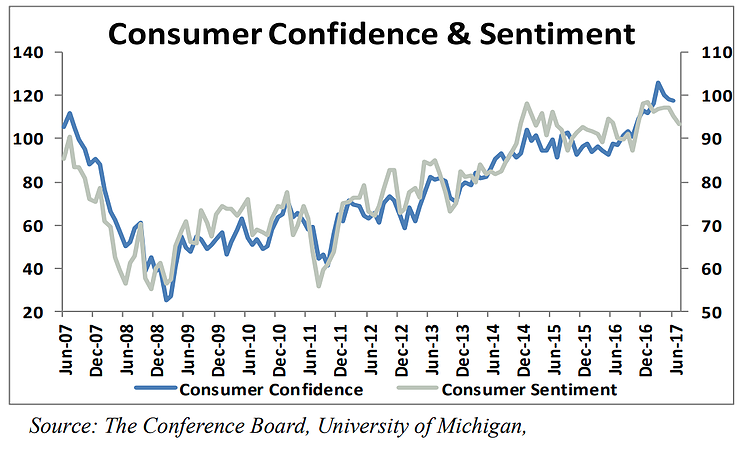 The “Goldilocks” employment situation in the U.S. continued with the July employment report. U.S. employers added 209K new jobs to the economy and this was ahead of the 180K estimate. The unemployment rate fell to 4.3% (lowest since May 2001) and although average hourly earnings increased 0.3% last month, the gauge seems stuck at 2.5% Y/Y. Job gains were pretty broad based across the economy and the labor participation rate ticked higher for the second consecutive month. There is no doubt that the labor market is tight in the U.S., but wage growth remains elusive. Janet Yellen is focused on the Phillips Curve and for any sign of wage pressure in the economy. Wage pressure is minimal at this point and should allow the Fed to take a cautious approach towards future rate hikes. Currently the market is pricing in a 50% chance of one additional rate hike this year.

The U.S. manufacturing and services sectors remain in healthy territory, but both ISM readings showed a slower pace of growth. The ISM Manufacturing Index fell to 56.3 in July from 57.8 in June with slower paces of expansion in employment, production and new orders. The ISM Non-Manufacturing Index fell from 57.4 in June to 53.9 in July. Business activity, new orders and employment all weakened during the month of July as the service sector cooled-off a bit. One final report showed that construction spending dropped 1.3% in June led by a plunge in government construction projects. Construction has weakened, but a pickup in residential construction is expected to support the healthy labor market.

Another quarter of strong earnings/revenue growth

Through 85% of the Q2 reporting season, earnings in the S&P 500 have grown 10.1% on revenue growth of 5.1%. Ten of 11 GICS sectors have reported positive EPS growth in Q2 with 70% of companies beating on the top line and 72% beating on the bottom line. Energy continues to provide a boost to the aggregate growth rate and in a bit of a surprise, companies beating earnings have actually fallen 0.1% as a result, below the five-year average increase of 1.4%. Companies that have missed earnings have fallen 2.6%, slightly worse than the five-year average of a 2.4% decline. If current numbers hold, this would mark the first time since 2011 that earnings have grown by 10%+ over consecutive quarters. Analysts expect 9.5% growth for 2017 and 11% for 2018. The weaker dollar has also become a tailwind for multinationals.

Eurozone economic growth accelerated during Q2 to an annualized rate of 2.1%. The 0.6% Q/Q growth rate was better than the 0.5% rate registered during Q1 and the annualized rate was the fastest since Q1 2011. The ECB’s monetary stimulus program appears to finally be boosting growth/activity in the region and it has flowed through to corporations who are seeing significant earnings growth and consumers who have increased their spending. Eurozone unemployment has fallen to a nine year low of 9.1% and there is a growing likelihood that the ECB could discuss withdrawing some stimulus later in 2017. The Eurozone economy doubled the 0.3% Q2 GDP growth rate posted by the struggling U.K.

Bubble comparisons aren’t justified, meet the BAT stocks Equity markets have surged higher in 2017 although a lot of the performance has come from just a handful of stocks such as Apple, Amazon, Alphabet, Netflix, Facebook and Microsoft. Analysts often compare current valuations to the tech bubble, but fundamentals and valuations tell a different story. During the tech bubble, many of the high flyers were trading at triple digit P/E ratios with little earnings, little cash and unrealistic market caps. As of Q117 data, similar high flyers are trading at much more reasonable valuations with significant cash reserves. We believe there are some companies trading at expensive levels in the market today, but comparisons to the tech bubble are not justified based on the underlying data. 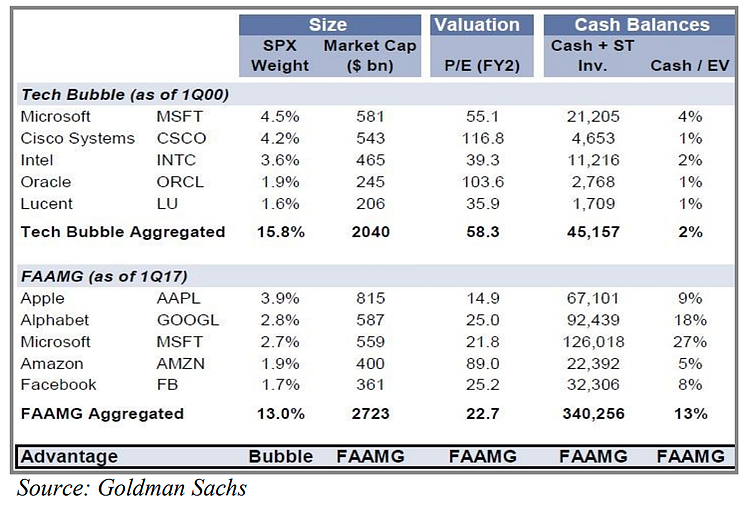 Have you ever heard of the BAT stocks? They are similar to the FANG stocks in the U.S., but refer to Chinese ecommerce behemoths Baidu, Alibaba and Tencent. Tencent has gained 69% YTD, Alibaba has jumped 80%, and Baidu has lagged with a rise of only 38%. Tencent is the largest holding in the MSCI EM Index, Alibaba is the fourth largest and Baidu is the eighth largest. Naspers, a South African company that owns part of Tencent, is the fifth largest stock in the benchmark. China (+36%) has been on fire this year and much of the gains have been driven by the BAT stocks and other smaller e-commerce names. The BATs are expected to post 40%+ EPS growth in 2017.