The price of oil has risen by more than 400% since it hit a low of $20/barrel in April of 2020.  However, at the current price near $80/barrel, it is still well  below its former peak of $140/barrel hit way back in June of 2008. Could oil prices get back over $100/barrel anytime soon?  What are the forces driving this rise in oil prices? If oil does rise above $100, what are the implications of this on the global economy?

Factors behind the rise in oil prices

Back in early 2017, oil supply persistently exceeded demand and, therefore, a significant supply of crude oil had accumulated, driving the price down. More recently, the price of WTI oil has recovered from the declines seen in the past decade – now sitting at approximately $80 dollars per barrel. Part of the explanation for the price rise was an agreement reached between OPEC and other large producers several years ago to cut production.

As can be seen in Figure 1, in June of 2017 oil prices began to increase, with both supply and demand being factors in the rise. On the supply side, the aforementioned agreement reached between OPEC countries and their partners to cut production succeeded in containing, and even reducing, the global oil supply. As this reduction in the supply drove prices up, US crude oil production was expected to rise and limit oil pricing.  However, US oil infrastructure was constrained by bottlenecks and not able to offset the impact of the OPEC cuts.

On the demand side, global economic growth surprised on the upside, and this led to increased oil consumption. This economic activity led to a depletion in crude oil stock, which explains the volatility in the price of oil and its renewed sensitivity to geopolitical risks today.  Several geopolitical risks could continue to force prices higher.

Russia is engaged in a military buildup on the Ukraine border which could have material implications for oil prices. If Russia does invade Ukraine, oil prices would likely spike in the wake of many countries implementing sanctions on the Russian economy.  In addition, there are production and export risks in other countries. For example, Libyan production has declined in recent months because they have had damage to their energy infrastructure. And the ongoing talks between the U.S. and Iran on a nuclear agreement, which would lift sanctions for oil exports, is another unknown.

This has all led to a prevailing sense that that supply will not grow in the short term.  Some believe that OPEC doesn’t have enough spare capacity to meet demand if pre-pandemic consumption levels appear.  And energy stocks are up as a group so far in 2022 (mid-January) while the overall stock market is down.  We’re about 20% from $100 a barrel.  A geological shock to the system could make prices jump that much.

Implications for the global economy

If we go back to basic economics, in the short term, higher oil prices lead to higher costs of production, increased inflation, and decreased living standards for consumers of oil.  In the long-term, higher oil prices can stimulate investment in oil (and alternative energy sources) and also encourage consumers to seek alternatives (e.g. electric cars.)  In fact, we have already seen a significant increase in the number of oil rigs in the US over the past year.  Here, we will focus on short term effects, primarily inflation.

A marked rise in oil prices will contribute to a higher inflation level. The cost of oil based  transportation generally rises, leading to higher prices for many consumer goods. This “pass-through” inflation is different than inflation caused by rising aggregate economic growth.  By default, therefore, consumers will see a fall in discretionary income because they face higher energy costs, but don’t have rising income to offset these costs.  If this leads to weakness in consumer spending, higher oil prices can lead to slower economic growth overall.

Of particular relevance is whether inflation from higher oil prices will prove transient or permanent. Often, higher oil prices only cause temporary inflation – e.g. in 2008, inflation rose to 5%, but then fell back towards 0% shortly after.  One factor that could lead to lower prices in the current environment is that the U.S. rig count is up 57% from the beginning of 2001.  Our view is that higher prices could remain for an extended period before falling in view of the ongoing supply chain issues globally.

We will keep you informed as events unfold. 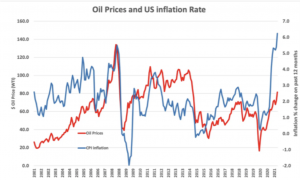