As expected, the Fed raised rates by a quarter point to a target range of 1.25-1.50%. The move was widely anticipated and priced into markets for some time now, but the FOMC also sharply upgraded its economic outlook for 2018. They expect economic growth of 2.5% (up from 2.1%) with inflation of 1.7% (revised up from 1.6%). The Fed expects the growth boost to be somewhat short-lived with 2.1% growth expected in 2019 and 2% in 2020. They also cut their forecast for unemployment and there was little change to their “dot plot” chart that suggests three rate hikes in 2018 and three more in 2019.

Stronger global growth and tax reform could lead to higher than expected inflation and a Fed that becomes quickly behind the curve. We are monitoring this closely although the global economy and global supply chain will likely help keep a lid on inflation.

U.S. manufacturing remained at solid levels in November despite the slight decline in the ISM Manufacturing Index. The index fell from 58.7 in October to 58.2 in November, led primarily by the drop in the supplier deliveries component. New orders and production actually rose in November. The depreciation of the dollar this year, together with the strength of demand in the rest of the world, means the outlook for the manufacturing sector remains bright.

The U.S. economy added 228K new jobs in November, ahead of the 200K estimate. The unemployment rate was unchanged at 4.1% and there were minimal revisions to the two previous monthly reports. Average hourly earnings rose 0.2% M/M or 2.5% Y/Y. This was a goldilocks report with solid job gains and benign wage growth.

U.S. economic growth was revised up to 3.3% (from the 3% advanced reading) based on the second Q3 GDP report. The economy grew 3.1% in Q2 and this marked the first time two consecutive quarters of 3%+ growth have been reported since 2014. Business spending was revised higher from 8.6% to 10.4%, but inventories accounted for 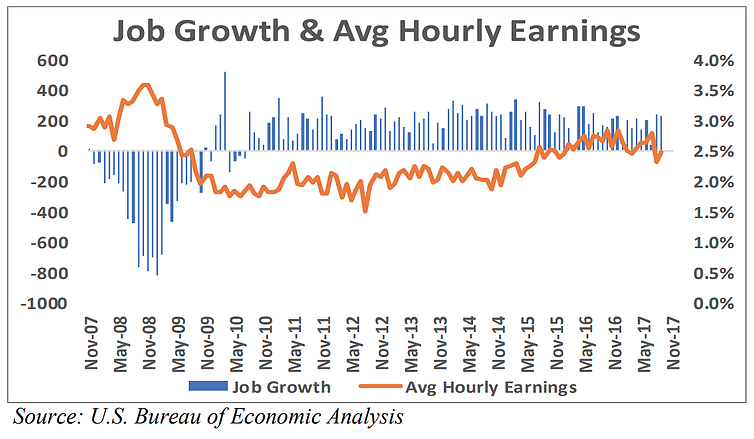 nearly a quarter of GDP growth. Excluding inventories, economic growth would have been only 2.5%. After jumping 3.3% in Q2, consumer spending was revised down to a 2.3% pace (down from initial reading of 2.4%).

Eurozone inflation rose less than expected last month with a Y/Y gain of 1.5% (vs. 1.6% estimate). Core inflation remained unchanged at 1.1% and the unemployment rate fell to 8.8%. Pricing pressure remains fairly weak despite the huge amount of stimulus, negative interest rates and recent surge in energy prices. The ECB expects inflation to dip towards 1% over the next few months as strong monthly readings fall off, and it is only expected to pick up towards the 1.5% level by 2019. The unemployment rate was the lowest since 2009, but similar to the rest of the globe, slack and the lack of wage inflation are concerning. The eurozone economy has perked up, but the ECB should be cautious with future policy action.

Japan’s core inflation rate rose 0.8% in October, a slight increase from the month before, while the unemployment rate remained steady at a very low 2.8%. Core inflation in Japan only increased 0.2%, indicating that the rise in prices was largely due to a jump in electricity (+8%) and kerosene (+21%). Inflation continues to hoover well below the BoJ’s 2% target, but it was encouraging to see wage growth rise to 3%. The BoJ remains quite accommodative with its monetary policy and the country has registered 7 consecutive quarters of growth, largely due to a pickup in exports. Recent data on manufacturing also suggest that the sector gained momentum in November, helped by a surge in demand from China.

President Trump nominated Jerome Powell as the next Chairman of the Federal Reserve. Powell replaces Janet Yellen in March after her unprecedented term expires. She has overseen an unparalleled period of economic and stock market growth since her term began in March 2009. Yellen’s Fed has hiked interest rates four times and began the process of unwinding the $4.5T balance sheet. Powell was largely seen as a smart and safe choice because he will likely continue Yellen’s framework of gradually normalizing rates and predictably reducing the balance sheet. Powell will also likely favor reducing regulations on smaller banks that have suffered in recent years.

Technology companies may not benefit much from the proposed tax reform legislation making its way through Congress. The tech sector has lagged the broader market in recent weeks as investors analyzed the impact on corporate earnings. Goldman Sachs strategists say the proposed tax bills could boost aggregate S&P 500 earnings by 5% next year, but for tech, it could be a 3% decline.

Based on analysis from GS, the tech sector paid the lowest effective tax rate in 2016 at 24%. Tech companies generate 59% of their revenues overseas and proposed tax reform targets multinationals who are stashing earnings overseas to avoid paying U.S. taxes. All other S&P 500 sectors are paying higher effective tax rates so they stand to benefit more from a cut in the corporate tax rate. Companies outside the tech sector generate more of their revenues from the U.S. and should benefit from a jump in earnings. Tech also accounts for a huge percentage of the cash stashed overseas that could be repatriated at a one-time lower rate.

In mid-November 2017, S&P/MSCI announced that the GICS telecom sector would be broadened and renamed communication services. The communication services sector will add select media, entertainment, and consumer Internet stocks from the consumer discretionary and I.T. sectors to its current telecom services constituents. The changes will be implemented after the market close on September 28, 2018 with the large cap company changes expected to be announced in January. 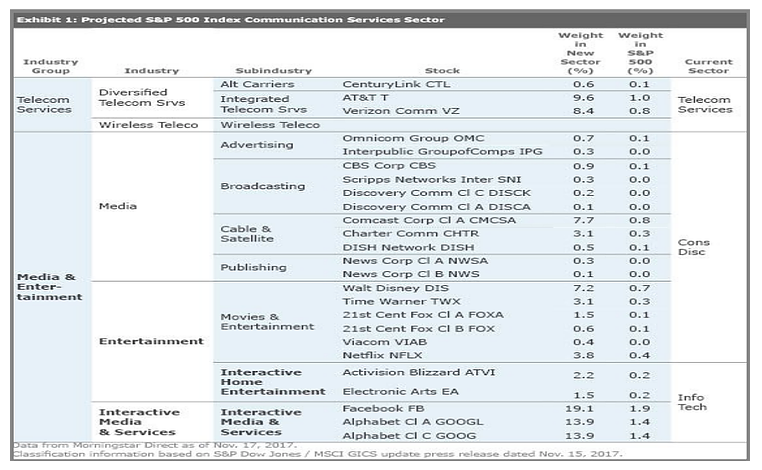 The current telecom sector represents 2% of the S&P 500 and that is expected to increase to around 10% based on the proposed changes. Official changes are expected in January, but some notable (potential) company shifts will be Alphabet/Google, Facebook, Netflix, Comcast, Time Warner and Walt Disney. All are expected to become part of the new communication services sector, and as a result, risk/beta metrics should increase and the dividend yield should decline. More broadly, the proposed changes should help balance sector allocations within the S&P 500 since technology has become unusually large at 25% and telecom has become insignificant at only 2%. 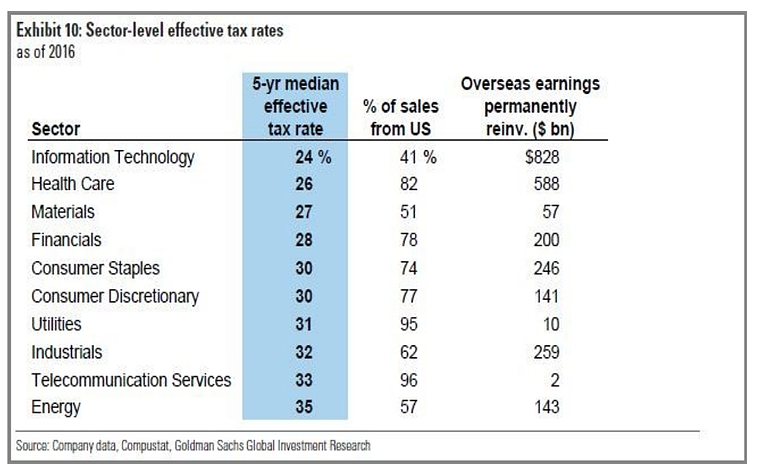