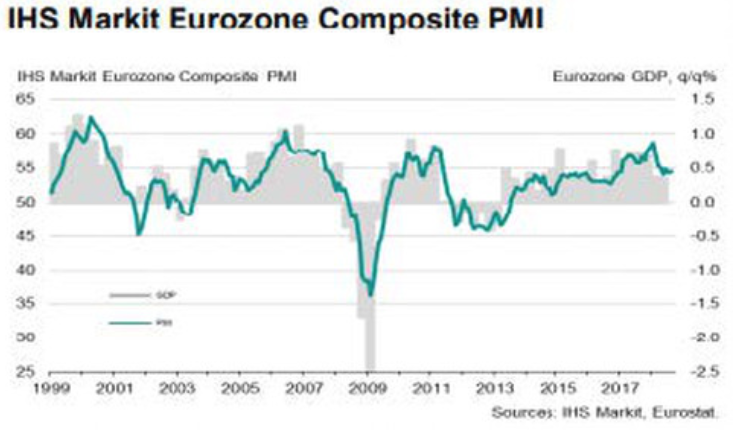 The eurozone economy saw its Q2 annual growth rate revised lower from 2.2% to 2.1%. This was down from Q1’s 2.4% rate and the near 3% levels registered at the end of 2017. Among eurozone countries, growth was strongest in Malta, Estonia and Slovakia, at 1.9%, 1.4% and 1.1% respectively, and weakest in France, Greece and Italy, all at 0.2%. The German economy grew 0.5% in Q2. The eurozone unemployment rate held steady at 8.2% for the past few months with the lowest rates in the Czech Republic, Germany and Poland. Greece and Spain continue to have the highest rates of unemployment which is not much of a surprise. Inflation fell back to 2% in August and the ECB’s preferred gauge, core inflation, came in at just 1%.

The IHS Markit Composite PMI rose to 54.5 in August from 54.3 in July. Output growth expanded in Ireland, Germany, France and Spain, but it weakened to a 22-month low in Italy. While the services component also edged higher in August, the overall report suggests that GDP growth remained consistent with Q2 levels (0.4% Q/Q). Trade tensions and worrisome growth trends in Italy and Spain could offset better readings from core countries like Germany and France. All eyes will be on the ECB as they unwind their QE program later this year and consider interest rate hikes during the first half of 2019. Eurozone economic growth continues to disappoint relative to other parts of the world and we have serious doubts about the sustainability of the recovery and corporate earnings.