The eurozone economy slowed further as expected during Q2. GDP increased 0.3% Q/Q and this was below economist projections and Q1’s 0.4% rate. This was also the weakest quarter of growth for the region since Q2 2016. Individual country data is not widely available so early, but countries that reported slower growth included Italy, Spain, Austria, and Latvia. Growth in France was unchanged and Germany is due to release its official numbers over the next few weeks. Year-over-year, the eurozone economy expanded 2.1%, below the 2.5% clip reported in Q1 and the 2.8% rates registered in Q3 and Q4 of 2017.

The eurozone Composite PMI fell in July to 54.3 after rebounding a bit to 54.9 in June. The slowdown was mainly centered on the service sector, where growth eased from June’s four-month high. Output growth improved in Germany, but it deteriorated in Spain, Italy, Ireland and France. The eurozone economy has clearly lost momentum since peaking earlier this year and the latest PMI data are consistent with GDP growth of around 0.3% Q/Q. 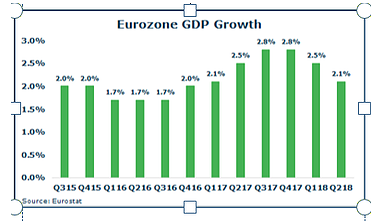