The Olympics are fantastic, something to look forward to every two years.

The best thing about them is that something unexpected always happens. This year, the victory of Ester Ledeka in the women’s Super-G ski race was the event of the games. If you haven’t seen it, you should go onto the web and find the replay. The short story is that she ran 26th and was not expected to win a medal. In fact, the TV coverage stopped after the “top racers” went. NBC had to interrupt figure skating to go back to the ski hill and show her amazing run and declare her the victor. The fact that she won another gold medal in snowboarding is another amazing story. February 2018 brought another surprise: a selloff in the equity markets. This correction was arguably overdue and even anticipated as long-absent volatility reentered the market with a vengeance. While market movements are attributable to myriad factors, the consensus principal culprit behind this reset was the flashing signals of inflation and the anticipated response by the Fed. Enter Jerome Powell, the new Fed Chair, who glided through the approval process in part because he appeared to come from the same stock as Ms. Yellen, suggesting a smooth transition. Powell made his testimonial debut this week and emphasized that he indeed plans to keep the policies of his predecessor in place. Thankfully we did not get another February surprise! But we will need to keep an eye on the potential for rising rates as the year progresses. In the meantime the global economy chugs along with steady growth across the board and markets have mostly recovered from the volatility seen earlier in the month.

U.S. employers added 200,000 new jobs to the economy in January, ahead of the 180,000 consensus estimate. The unemployment rate held steady at a 17-year low of 4.1%, as a 409,000 gain in household employment was cancelled out by a 518,000 rise in the labor force. The jump in average hourly earnings was the real headline in the re-port. Wages rose 0.3% M/M or 2.9% Y/Y, the highest reading in eight years. A slight drop in average weekly hours worked partially explains the increase in average hourly earnings, but there are clearly signs of an accelera-tion in wage pressure. The Employment Cost Index also rose at a 2.6% annual rate, the highest reading since 2008.

The ISM Manufacturing Index fell slightly in January to 59.1 from 59.3 in December. New orders, production and employment all softened, but the overall level of activity remains consistent with 4%+ GDP growth. With domestic demand receiving a boost from tax cuts and external demand buoyed by strong global growth and a depreciating USD, the manufacturing sector should remain in solid shape in 2018.

The ISM Non-Manufacturing Index surged higher in January after declining over the previous few months. The index jumped from 56.0 in December to 59.9 in January, the highest level since August 2005. The rise was driven mainly by a surge in new orders, perhaps early evidence that tax cuts are boosting demand. The employment index also rose to a record high while production posted a modest gain. The economy has gathered momentum to start 2018 based on this report.

As expected, the Fed left rates unchanged at its January meeting and Jerome Powell took over the reigns on February 2nd. The Fed’s statement was slightly more hawkish as the reference to inflation remaining below 2% in the near-term was removed. The reality is that inflation has risen over the past few months and currently sits near or above the 2% target level depending on the data series. A March rate hike is already priced into markets, but the boost from tax reform and the stronger global economy could result in surging inflation and a more hawkish Fed that is forced to raise rates more than anticipated in 2018. 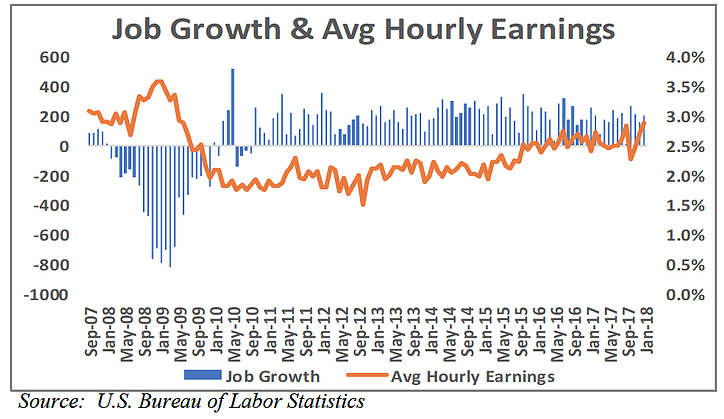 Based on the Q4 GDP report, an acceleration in consumer spending has led to slightly higher inflation. The Fed’s preferred inflation gauge, the personal consumption expenditures (PCE) price index excluding food and energy, rose 1.9% in Q4. This marked the quickest pace in more than a year and followed a 1.3% rate of increase in Q3.

New home sales fell 9.3% in December (+14.1% Y/Y) to a seasonally-adjusted annual rate of 625k units. The decline was the largest since August 2016 and November’s sales pace was also revised lower. December sales were hurt by cold weather across the country. Existing home sales fell 3.6% in December as inventories dropped to a record low. Consumer confidence strengthened in January, driven by a bump in the future expectations index.

Corporate earnings showing strength, should get a boost from tax reform; welcome back volatility!

Halfway through the Q4 earnings season, the blended earnings growth rate for the S&P 500 is 13.4%. All 11 GICS sectors have reported earnings growth in Q4, led by the 111% jump in the energy sector and the 41% surge in the materials sector. Technology, financials, utilities and telecom have all reported double-digit earnings growth in Q4. Q4 revenue growth has been 7.5% for the S&P 500 with the strongest sectors being materials, energy, and tech. 75% of S&P 500 companies have reported positive EPS surprises and 80% have reported posi-tive sales surprises. Initial estimates for Q4 were for 11% growth so as it currently stands, Q4 would be the 18th straight quarter of better than expected earnings growth. Volatility spiked higher at the end of January, driven by the jump in the 10-Year Treasury yield and rising inflation expec-tations. The 2.9% average hourly earnings figure reported in the January employment report spooked investors and mar-kets saw a massive selloff when the 10-Year Treasury yield hit 2.85%. In simplistic terms, the VIX has averaged about 18.5 since 2004 and it averaged 11.09 in 2017. 2017 was a very unusual year with strong gains across most asset classes and virtually no volatility. 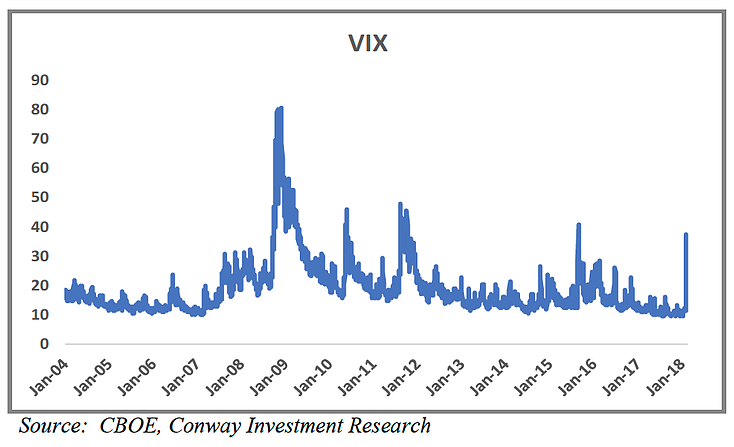 Accommodative central bank policy has provided a sup-portive backdrop for asset prices since the financial crisis and this is now nearing an end game. Central banks are pulling back on stimulus and monetary policy has been tightening across many countries. The VIX sat below 11 until January 16, 2018 when it began to move higher. It steadily moved higher through the end of January until it spiked from 13.47 to 17.31 on February 2nd and more than doubled to 37.32 on February 5th. The fear gauge has settled down since the market decline on February 5th, but it continues to sit at ele-vated levels. Volatility has risen and we believe 2018 should bring a more normalized market environment.

Divergence continues with the eurozone firing on all cylin-ders and the U.K. facing a Brexit hangover

The eurozone grew 0.6% Q/Q or 2.7% Y/Y in Q4 2017. Euro-zone GDP rose 2.5% in 2017, the fastest growth rate since 3% was registered in 2007. The eurozone economy continues to show improvement although one concern is recent euro strength that could dampen external demand. The euro-zone Composite PMI hit its highest level since June 2006 in January at 58.8. PMI activity has grown more broad based in Europe and based on current levels, Q118 GDP could come in near 1%. The eurozone certainly has built a lot of momentum over the past few quarters and it has led to lower unemployment and the potential for higher inflation down the road. Based on current economic data, the ECB will likely end its bond buying program.

While the eurozone continues to post robust economic growth, there is a divergence taking place with the U.K. The U.K. economy grew 0.5% in Q4 (above expectations), but 2017 growth was only 1.8%, down slightly from 2016 and the worst annual reading since 2012. The U.K. economy has shown resiliency, but it continues to suffer from a Brexit hangover. Most economic forecasts are being revised lower for the U.K. while they are being revised higher for the eurozone. 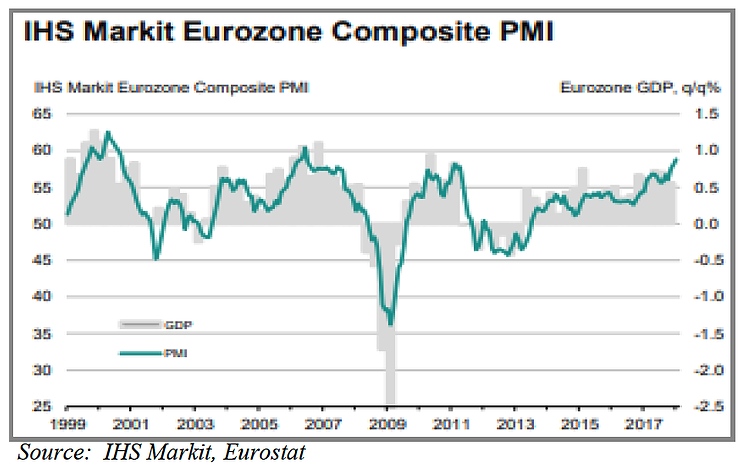 Earnings are projected to grow 13.3% in EMs in 2018 with revenue growth of 9%. The rate of earnings growth is expected to slow to 11% in 2019 with revenue growth of 7%. MSCI EAFE earnings are projected to grow 9.4% in 2018 and 8% in 2019. EM countries such as India and Brazil are expected to see the highest growth along with developed countries like Spain, Italy, Sweden and Switzerland. China is forecast to grow earnings 16% in 2018 and 2019.