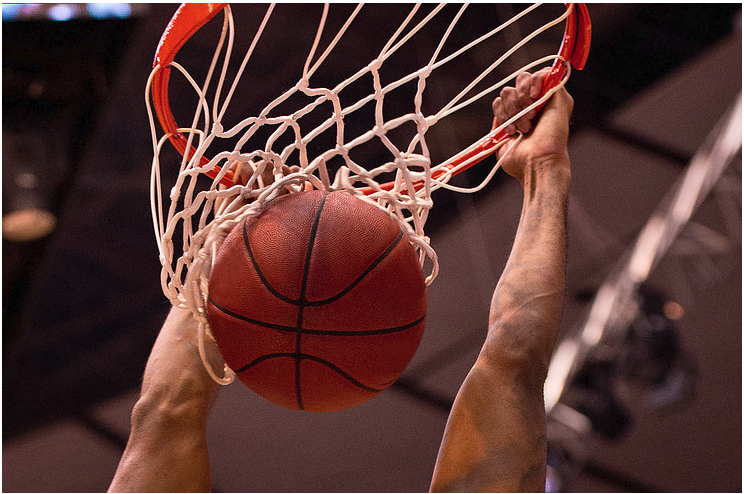 As many of you know by now, this year’s NCAA March Madness tournament has been more mad than usual. We had a 16 seed beat a number 1 seed (never happened before) and, in another first, none of the top four seeds in the South region made it to the sweet 16. What gives? The game changer is the 3-point shot. It has become a big factor in the ability of an underdog to win. By way of background, in the NBA 33% of shots are taken from behind the 3 point arch. In college it jumps to 38%. This year, the number of 3-pointers in the first two rounds of the tournament spiked to 44% of shots taken. How did #1 seed Virginia go down? UMBC took 48 shots against Virginia, and 24 of them were threes. And how about the Arizona upset? According to ESPN, 90% of the 17.3 million brackets submitted on its website had picked Arizona to win its first round game; and more than one sixth of those brackets selected Arizona to advance to the Final Four. The 3 pointer strikes again.

In the markets the game changer may indeed be the newly introduced fiscal stimulus. On top of synchronized global growth, job creation, and broadly favorable economic data, the fiscal stimulus at the end of last year might be the catalyst to lift the lid on inflation and more aggressive Fed action. Today, March 21, the Federal Reserve said it would raise short-term interest rates a quarter-percentage point and signaled it could lift them at a slightly more aggressive pace in coming years to keep the strengthening economy on an even keel. Fed officials said they would increase the benchmark fed-funds rate to a range between 1.5% and 1.75% and penciled in a total of three rate increases for this year. But compared with December, more officials think they will need to raise interest rates at least four times this year if the economy performs in line with their expectations. According to the WSJ, seven of 15 participants now expect at least four rate increases this year, an increase from four of 16 participants at the December meeting. And the Fed now see core inflation rising to 2.1% next year, up from an earlier projection of 2%. Because inflation has run below the Fed’s target since officials formally adopted it in 2012, we don’t have a good read on how to chart interest-rate policy when inflation is above target. And they now see the economy growing by 2.7% this year and 2.4% in 2019, versus earlier projections of 2.5% and 2.1%, respectively. Economists expect the stimulus will push unemployment down to the low 3% range next year. We will need to keep an eye on this situation but the faster rates rise, the more potential competition for stocks.

The February employment report was very strong with 313K new jobs added to the economy (estimate was 200K). The previous two months were revised higher by 54K jobs and the unemployment rate held steady at 4.1% as more workers entered the labor force. The big surprise was the minimal 0.1% M/M rise in average hourly earnings which dropped the Y/Y rate back down from 2.9% to 2.6%. The labor market is looking tight and healthy although wage pressure moderated during the month and this continue to be an enigma. Inflation and wage pressure continues to be somewhat elusive and this should allow the Fed to maintain its cautious stance.

The ISM Manufacturing Index jumped to a 13-year high in February with a reading of 60.8 (up from 59.1 in January). While production and new orders fell slightly last month, they remain at strong levels and the surge in employment more than offset the weakness. Employment jumped from 54.2 to 59.7 in February, suggesting strong manufacturing hiring in the coming months. The U.S. manufacturing sector remains in solid shape, boosted by the weaker dollar, strong global economic growth and robust domestic demand resulting from recent tax/fiscal stimulus.

U.S. durable goods orders fell more than expected in January as the –3.7% headline number was worse than the –2% expectation. Orders for non-defense capital goods excluding aircraft, a closely watched proxy for business spending, dropped 0.2% after declining 0.6% in December. This marked the first back-to-back monthly declines in core capital goods since May 2016 and signals some weakness in business spending after robust growth in 2017. The soft headline number was driven by a significant decline in the volatile aircraft segment.

Retail sales fell 0.3% in January, the largest fall since February 2017. December’s reading was also revised down to unchanged after initially showing a gain of 0.4%. Core retail sales were flat in January after falling 0.2% in December. Auto sales and building materials were weak in January and the overall report was negatively impacted by the widespread national flu outbreak. Certain elements of the economy appear to be on solid footing, but recent readings on durable goods orders and retail sales point to some slowing in consumer and business spending. 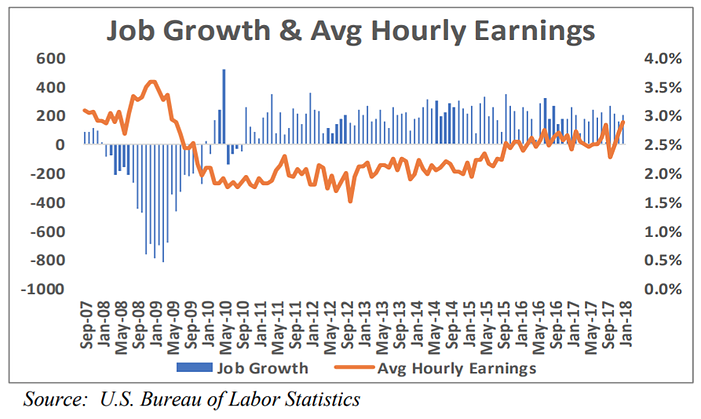 The Fed’s preferred measure of inflation is the Personal Consumption Expenditures (PCE) Index because it accounts for substitutions in consumer goods unlike the more well know CPI Index. The PCE Index jumped 0.4% in January to an annualized rate of 1.7% while the core PCE Index rose 0.3% to an annualized rate of 1.5%. Core PCE has undershot the Fed’s 2% target since 2012, but it is expected to rise this year as things like lower energy prices in 2017 roll off and as tight labor market conditions ultimately drive wage growth higher. CPI sits above the Fed’s target so future readings will be crucial for determining the path and pace of Fed rate hikes.

Tax reform causes a surge in confidence; economy & earnings not the cause of recent market volatility

Tax cuts have boosted consumer confidence to a 17-year high. The Consumer Confidence Index surged from 124.3 in January to 130.8 in February led by increases in both the present situation and expectations indices. Consumer confidence has remained robust since Trump was elected President, but it has not necessarily translated into stronger consumer spending. Spending has generally been in the 3% growth range over the past few quarters and an acceleration is unlikely given other hard economic data points that point to some weakness. Recent market volatility has little to do with the underlying economy and corporate earnings. Economic growth continues to be solid across the board with the main concern being inflation/wage growth and how many rate hikes the Fed will implement in 2018. Corporate earnings grew 15% in Q417 and they are forecast to increase 18% in 2018 and 10% in 2019. The recent decline in the S&P 500 has brought the forward P/E multiple down to 16.7x which is above historical averages, but below the expected 2018 earnings growth rate. Strong earnings growth should provide support for market valuations.

Inflation continues to present challenges to U.K. policymakers; did the eurozone hit a speed bump?

U.K. inflation remained stubbornly high in January at a 3% annual rate. This was unchanged versus December and above the 2.9% forecast. Inflation peaked at 3.1% in November 2017 and despite falling food prices, it has only declined slightly and remains above wage growth. Interest rates sit at 0.5% in the U.K. and the BoE has indicated its desire to raise rates more quickly to bring inflation back down to the 2% target. The BoE wants to raise rates more aggressively, but this may be a challenge considering mounting signs of slowing economic growth. The eurozone economy may have hit a speed bump in February as rising prices may have impacted demand. The IHS Markit Composite PMI fell from 58.8 in January to 57.1 in February. January’s reading was the best since June 2006 and a decline was likely after several months of strong activity. Growth was solid and broad based across the region and the current data suggest that Q1 GDP growth is in the 0.8-0.9% range. Inflation in the eurozone fell in February to 1.2% Y/Y from 1.3% in the previous month. Core inflation came in at 1% Y/Y and that remains well below the ECB’s 2% target. Eurozone growth has improved, but inflation remains elusive and the ECBmay need to keep its foot on the gas for a bit longer.

China set its 2018 growth target at 6.5% based on the annual National People’s Congress session. 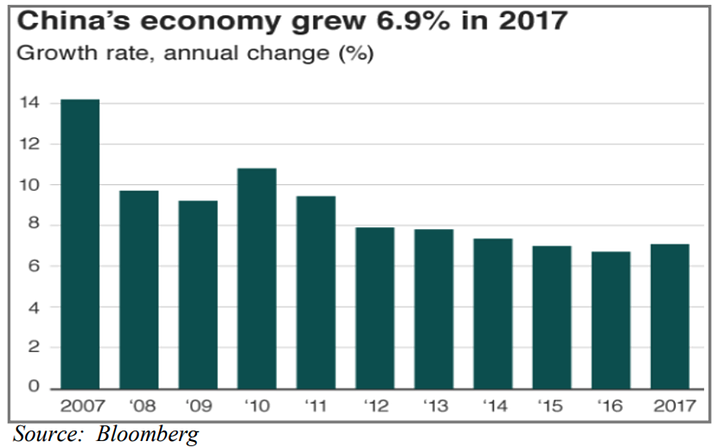 The economy grew 6.9% in 2017 which was above the 6.5% target in place. The Chinese government expects growth to slow this year as they attempt to reduce risk in the overheated property and financial segments. Other initiatives announced include the cutting of taxes, reduction of the deficit from 3% to 2.6%, more restrained government spending and a boost to defense spending (8.1% from 7%).

After 5 years of declining capital expenditure (capex) growth for emerging markets, capex growth is forecasted to have turned positive. EMs finished 2017 with estimated capex growth of 6% and in 2018, EM corporations are expected to spend 37% more versus 2017. Infrastructure spending could be one area that boosts future capex growth. The significant increase could provide a nice tailwind for the asset class. 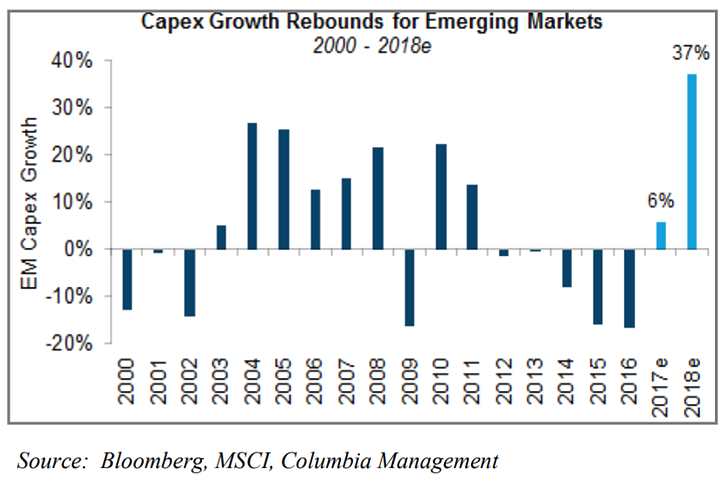