Implications Of The Russia/Ukraine Situation

Following a propaganda campaign positioning itself as a threatened victim, Russia invaded Ukraine on February 24th. The first round of financial sanctions levied by the West did little to de-escalate the situation.

We understand that the most significant impact of the Russian invasion is to individual Ukrainians and our thoughts remain with them.  Here we will focus on the economic impacts.

What are the economic implications of this war?  From an export perspective, direct trade with Russia is relatively small for both the Euro area at 0.6% of GDP and the US economy at 0.4% of exports. However, the effect of commodity prices can be meaningful and is the main driver of how the conflict affects the world economy. Oil prices have broken through $100 per barrel.  While rate hikes by global central banks are still a focus, if the increased geopolitical risks negatively impact global growth, it could make central banks more hesitant to tighten monetary policy.

The Russian invasion of Ukraine may increase downside risks to the global economic outlook.  Geopolitical tensions could cause a sustained rise in commodity prices. This can cause higher inflation and reduce discretionary consumer spending. Each central bank’s response will likely be determined by local economic conditions.  In the U.S., the Fed is still on track to raise short term rates by 25 basis points in March.  In Europe, the ECB may be more cautious because they are more directly impacted by any commodity disruptions from Russia.  With that said, the chart below shows that, on average, equity markets have hit their nadir 10 days after a significant geopolitical shock and recovered within 3 months. 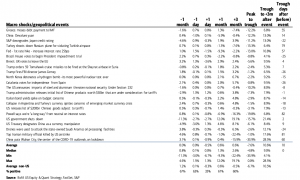 As noted, the main area for concern is the amount of energy supplied by Russia.  Russia is the world’s largest exporter of natural gas, with most of this gas shipped to Europe and Asia via pipelines.   Furthermore, Russia is the second largest exporter of crude oil and petroleum products globally behind Saudi Arabia.  So if Russia wanted to it could disrupt global energy needs.  On the flipside, without energy exports Russia’s economy is in very poor condition.  Therefore, Russia has a large incentive to continue to produce and export petroleum products.

At the present time, we are not adjusting our asset allocation because we believe markets will recover.  Although major US stock indexes are in or near correction territory—meaning a drop of 10%—and technology stocks are flirting with a bear market, with declines approaching 20% since highs reached in late 2021, the economy is relatively strong. As we have noted many times, these kinds of market declines are common. In fact, it had been 95 weeks since we had a 10% correction: we were overdue.   Will the Ukrainian situation cause a recession and potentially a larger correction?  Based on the data we have reviewed, we believe an economic recession is unlikely this year because the U.S. consumer has ample savings, business inventories are near historical lows, and global production is expanding as measured by ISM data.

There are risks to be aware of: rising inflation and expected Fed rate hikes this year. The market is pricing in six 25 basis point rate hikes by the Fed this year. Some investors believe the Fed is behind the curve of curbing inflation.  If the Fed gets more aggressive, markets could react negatively.  The March meeting will shed light on this situation.   History shows a relatively consistent trend of positive market performance during the first year of Fed rate hike cycles.

Another risk, as noted earlier, is the conflict spreading to a NATO country.  This action could drag more countries in, making it broader and more economically troublesome.  Unless we see these risks changing materially, we encourage clients to stick to their long-term targets.