Is the US winning the trade war?

Trade and tariff tensions remain a key risk to the global economy and financial markets. In 2018, U.S. equities have been the place to be with outsized gains relative to other developed and emerging markets. YTD, the S&P 500 has gained 7.4% and the Russell 2000 has risen 9.7%. Non-U.S. equities have been hit hard by tariff concerns, political uncertainty, the prospect of tighter monetary policy and the stronger U.S. dollar. The MSCI EAFE Index has gained ground in local terms, but it has fallen 1.2% in 2018. EM equities are also down 5.6%. 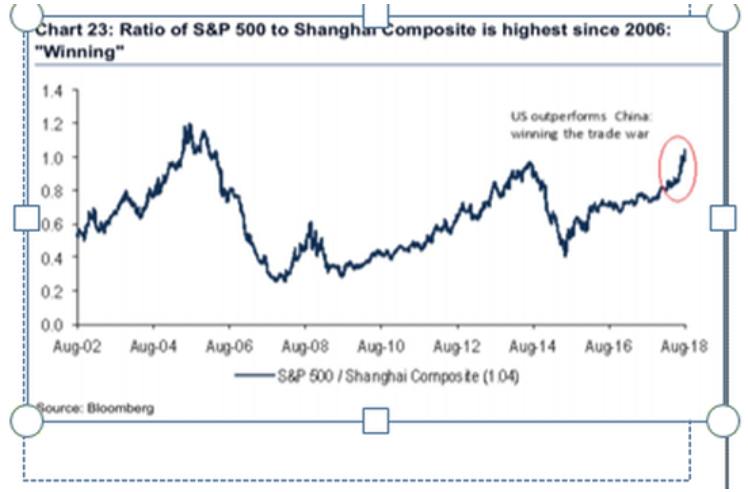 The Shanghai Composite has fallen 18% YTD and it is down 25% since peaking at the end of January. Investors and capital have been fleeing the country in recent months, largely due to heightened tensions with the U.S. over trade and tariffs. While it is difficult to say whether a real trade war has started, global stock markets are clearly saying that the U.S. is winning. China’s economy appears to be slowing and the PBOC has shifted to more of an easing stance over the past few months.

We expect to see interest rate and Reserve Requirement Ratio cuts to help stabilize the situation, but the government is unlikely to give in quickly with regards to Trump’s trade demands. There is no way China can match the U.S. on tariffs, but they have allowed the yuan to weaken nearly 10% over the past few months, making their exports more attractive. Hopefully cooler heads will prevail, but another tool to watch is the country’s large holding of U.S. Treasuries.