The May employment report came in weaker than expected with only 138,000 new jobs added to the economy. This was well below the 185,000 estimate although the unemployment rate dropped to its lowest level since May 2001 at 4.3%. A total of 66,000 jobs were erased from the March and April reports.

The unemployment rate declined last month, but the rationale behind it was troubling. The number of employed fell by 233,000 while the labor participation rate also declined by over 600,000. The U6 unemployment rate declined to 8.4%, its lowest level since November 2007. Average hourly earnings rose only 0.2% in May or 2.5% Y/Y. Wage growth has remained steady at around 2.5%, but it is still below levels that could force the Fed to raise rates more quickly.

Job growth has clearly slowed over the past few months after a strong start to 2017. It has averaged just 121,000 over the past three months after eclipsing 200,000 in January and February. Part of the weakness could be attributed to a Spring slowdown along with the lag from college graduates entering the workforce. Regardless of the explanation, May’s report was weak and consistent with an economy that continues to struggle to gain momentum.

The Fed raised rates for the second time in 2017 at its June meeting. The dot chart was unchanged with one more hike expected this year and the Fed raised its growth forecast slightly, but lowered its forecast for inflation/unemployment. The market is skeptical as the probability of a December rate hike sits below 50%. Details were also revealed on the Fed’s plan to unwind its balance sheet. Q1 GDP growth was revised up to 1.2% led by an upward revision in consumer spending that offset a smaller than reported inventory investment. Q2 growth estimates are 2.5-3%, but revisions down are possible.

U.S. manufacturing edged up in May as the ISM Manufacturing Index rose from 54.8 in April to 54.9. Economists expected a reading of 54.5 in May and any reading above 50 separates expansion from contraction. Manufacturing 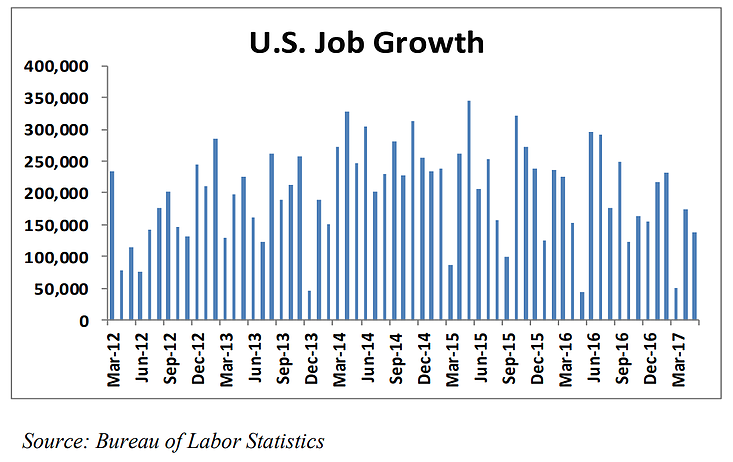 has grown for 96 consecutive months and the increase was supported by a rise in new orders and employment. Production lost ground last month and the prices component fell, perhaps signaling an easing of pricing pressures.

Economic activity in the services sector grew in May for the 89th consecutive month, according to ISM. The ISM NonManufacturing Index was 56.9, falling slightly short of the 57.1 expectation and 57.5 reading from April. Employment strengthened but new orders and prices paid both weakened. The rate of growth moderated in May, but the sector continues to exhibit strength led by growth in employment and new orders.

Orders for durable goods fell 0.7% in April, slightly better than the 1% decline expectation. Durable goods orders had risen for the past four months before falling back in April due to weakness in the volatile transportation segment. A measure of business investment, core capital-goods orders, was flat for the second consecutive month.

Since the November election, there has been significant dispersion between the hard and soft economic data points. The soft/survey data was recently at record high levels while the hard data like factory orders has been much weaker. Recent weakness in factory orders and durable goods new orders have sent the hard data gauge to its lowest level since May 2016 while the soft data gauge has dropped to a six month low. Neither point to a positive situation for the economy and President Trump.

U.S. new home sales plummeted 11.4% in April to a seasonally-adjusted annual rate of 569k units, well below the 642k unit pace in March. New home sales have risen in three of the past four months and they now sit 0.5% higher than a year ago. Inventory levels increased 1.5% and at the current sales pace, it would take 5.7 months to clear out the current supply of houses on the market. Six months is considered a healthy market. Existing home sales fell 2.3% in April (seasonally adjusted annual rate of 5.57M) and after a downward revision to March’s report, sales are only up 1.6% Y/Y. Stubbornly low supplies have held down home sales recently as increased competition continues to push up prices.

Q1 earnings came in better than expected as the aggregate growth rate for the S&P 500 was 14% (ahead of the 9% estimate to start the quarter). This marked the highest Y/Y earnings growth rate for the S&P 500 since 16.7% was recorded in Q3’11. Ten of eleven GICS sectors reported Y/Y earnings growth, led by energy, financials, materials, and IT. Telecom was the only sector that reported a Y/Y decline in earnings.

Eurozone showing strength, Japan limps along, another day another scandal in Brazil

The IHS Markit Eurozone Composite PMI was 56.8 in May, consistent with April’s level which marked the fastest pace of growth in six years. Output growth hit a 73-month high in Germany and it hit a 72-month high in France. This PMI data point to an economy that is growing at a 0.7% quarterly rate and the outlook for the region now appears to be tilted towards the upside. Growth forecasts could be revised higher over the coming months. 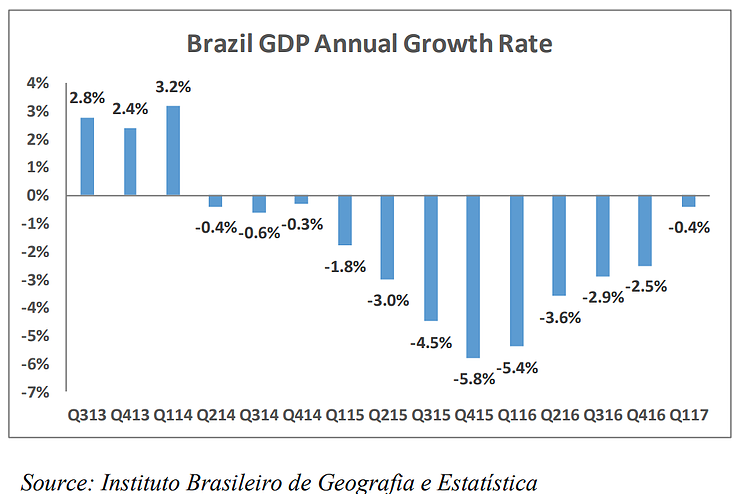 growth was ahead of U.S. economic growth and momentum appears to be on the upside based on recent hard/soft data. There were concerns over the French election derailing growth and markets in the region, but Macron’s victory should quell fears for now over the rise in populism and potential policy changes. France still has Parliamentary elections in June and key elections loom in Germany and Italy.

Japan’s economy grew at a 1% annualized rate in Q1, below the 1.7% forecast and 2.2% preliminary rate. This was the fifth straight quarter of growth and the downward revision was driven by a one-time oil inventory adjustment. Private consumption rose 0.3% and capital expenditures increased 0.6%. Inventories detracted 0.1% from Q1 growth whereas government, business and household spending added 0.1%.

After eight quarters of contraction, Brazil’s economy finally got itself out of the doldrums. Brazil’s economy grew 1% Q/Q led by agriculture and exports that offset weakness in consumer and business spending. The bump from agriculture/exports was potentially a one time event as the Brazilian economy remains a disaster with high unemployment, stagnant wages and weak services and manufacturing. The new corruption scandal against President Michel Temer certainly does not help matters. Q1 GDP still sits below year ago levels despite the Q/Q rise.