After a disappointing March showing, hiring picked up in April with 211,000 new jobs added to the economy. The expectation was 185,000 new jobs so the report came in above consensus and the unemployment rate ticked down to 4.4%. Average hourly earnings grew at a 2.5% annualized pace and the so‐called U6 unemployment rate fell to 8.6%, down from 17% in 2010. Wage growth was solid, but not robust and the 4.4% headline unemployment rate was the lowest since May 2007. The February and March reports were revised lower by a total of 6,000 jobs and the monthly average for 2017 has been 185,000.

The Fed kept short term interest rates unchanged at its recent May meeting, but this solid employment report was the type of “hard” data point they needed to justify a move higher in June. The Fed Fund Futures now predict an 83% chance of a June rate hike with the likely next move occurring in December.

The typical seasonal slowdown in the U.S. economy struck again in Q1. GDP slowed to 0.7% in Q1, largely driven by a big decline in inventories and weak consumer spending. Economists were expecting growth of 1% and the final reading for Q4 was 2.1%. The decline in inventories shaved off 0.9% from growth while private fixed non‐residential investment contributed 1.1% and exports added 0.1%. Household consumption grew by only 0.3% in Q1, down from 3.5% in Q4. PCE inflation rose 2.4% Y/Y in Q1, above the Fed’s 2% target, and Core PCE rose 2%. The economy has gathered momentum thus far in Q2 with GDP expectations ranging from 3‐4%. 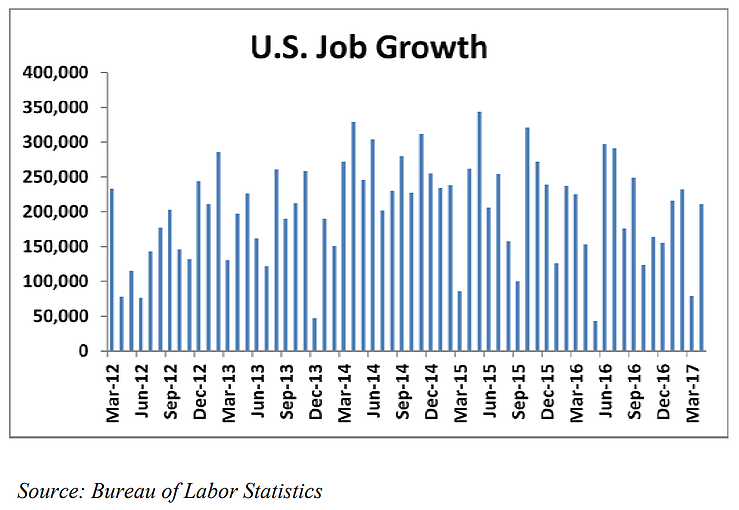 by the energy sector as steady increases in crude oil prices boost drilling activity. New orders and employment both weakened in the April report, and the overall reading has come down over the past two months as businesses digest the uncertainty surrounding Trump’s agenda.

Q1 earnings have been strong through 60% of the reporting season. S&P 500 earnings have surged 12.5% Y/Y which would be the highest growth rate since Q311. The estimate to start the quarter was 9% so the better than expected Q1 earnings have come from strong upside surprises in industrials, materials, energy, healthcare and consumer staples. Revenue growth has also come in slightly better than expected at 7.5%. Earnings are projected to grow 10.1% in 2017 and 11.9% in 2018, although we recognize the optimism from the analyst community. It is important to note that the energy sector has gone from a headwind to a tailwind in 2017. Excluding the energy sector, earnings have only grown 8.3%.

The ECB kept the status quo at its April meeting with deposit rates still sitting at –0.4%. Their QE bond buying program will continue until the end of 2017 albeit at a reduced monthly rate of €60B. Risks were becoming more balanced, but they continue to be tilted towards the downside. The economy has 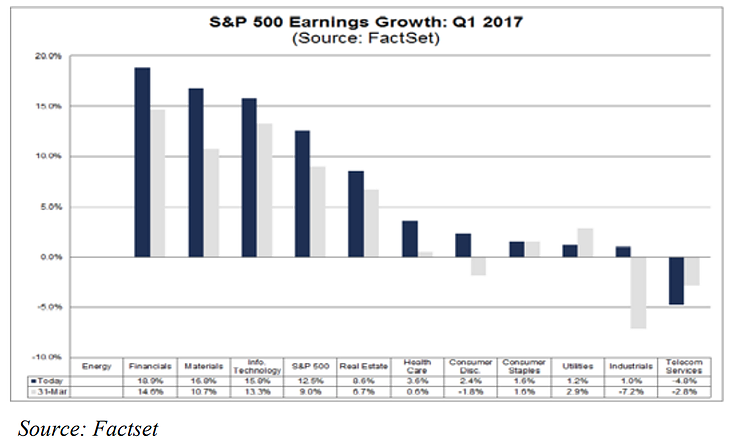 gathered steam in recent quarters with rising sentiment, stronger PMIs, and improving corporate earnings, but inflation remains subdued with little upward pressure. There were no changes to the ECB’s forward guidance as Mario Draghi stressed that there was no evidence to alter the inflation outlook

The Eurozone economy grew 0.5% in Q1, consistent with the Q4 level. Year‐over‐year growth fell slightly from 1.8% in Q4 to a 1.7% pace in Q1. Q1 growth met expectations and high‐ lights the improvement and momentum in the economy. The decisive victory by Emmanuel Macron should quell the populist movement across Europe and remove any left tail event possibilities for global financial markets, the Eurozone economy and the euro.

The Markit Eurozone Manufacturing PMI expanded at its fastest pace in six years with April’s reading increasing from 56.2 in March to 56.7. New orders, output and employment all grew at their fastest rates in six years and the overall sur‐ vey suggests that manufacturing is growing at a 4‐5% annual rate. Based on April Eurozone Composite PMI data, economic growth is expanding at a 0.7% quarterly rate in Q2. This level of growth has not been achieved in over six years with fairly strong readings from Germany, France, Italy and Spain. Although this is “soft” survey data, it is certainly encouraging and suggests some upside to 2017 economic growth fore‐ casts.

The Bank of Japan kept monetary policy steady in April, but raised its economic growth forecast from 1.5% to 1.6% and lowered its inflation forecast from 1.5% to 1.4%. While the country continues to struggle with raising inflation, the BOJ believes the economy is now expanding rather than just re‐ covering. The economy expanded 1.2% Y/Y in Q4 and the yield curve targeting policy has been successful at keeping the 10‐Year JGB at 0%. The more optimistic growth forecast is certainly encouraging although we continue to believe that Japan faces enormous demographic and structural challenges and tepid wage growth. 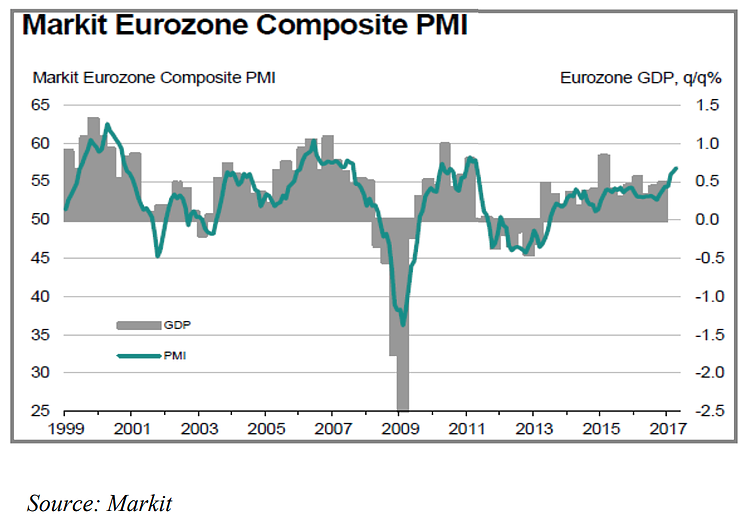 Chinese consumption continues to grow, overheated property market could lead to a slowdown

Recent China PMI data is signaling a slowdown in the world’s second largest economy. The Caixin Services PMI fell for the fourth straight month in April to 51.5, the Caixin Manufacturing PMI fell to a seven month low of 50.3, and the official manufacturing PMI fell less sharply but still slid to a six month low of 51.2. The official service sector PMI remains at solid levels, but it did fall in April to 54.0 from 55.1 in March.

The Chinese economy grew 6.9% in Q1, but experts believe it will cool over the next few quarters as the government attempts to reign in the overheated property market. The surge in construction and investment over the past few quarters should help the country meet its 6.5% target growth rate for 2017. The consumer continues to exhibit strength as retail sales jumped 10% Y/Y in Q1. Consumption accounted for nearly 65% of China’s GDP in 2016 and the PBOC has been trying to shift the economy towards a more consumer driven growth model.