After months of relative calm in financial markets, trade tensions once again ignited as President Trump raised tariffs on $200B worth of goods from 10% to 25%. The U.S. and China have been negotiating the details of a trade deal for months and apparently President Xi of China backtracked on several key points over the past few weeks. China’s finance ministry announced on Monday evening that it was raising tariffs on a wide range of American goods to 20 or 25 percent from 10 percent. But the ministry delayed implementation on until June 1. The next volley in the trade war could come from the U.S. proposing tari hikes on the remaining $300B worth of goods coming from China. China’s en tire imports from the U.S. are considerably less than $200B, so it does not have the option of matching the U.S. dollar for dollar. Neither the U.S. tariffs nor China’s retaliaton will go into effect right away, perhaps leaving room to reach a deal.

The U.S. labor machine kept humming along in April with 263,000 new jobs added to the economy and the unemployment rate (3.6%) that hit its lowest level since December 1969. Job growth easily surpassed the 190,000 expectation and the February and March reports saw a slight net upward revision. Average hourly earnings remained at at 3.2% Y/Y and the participation rate declined to 62.8%. The larger than anticipated drop in the unemployment rate resulted from strong hiring and the decline in the participation rate. The strong labor market backdrop in the U.S. continues to fuel healthy economic growth. It really is a goldilocks labor market situation with strong hiring trends and benign wage growth.

U.S. consumer prices rose in April but underlying inflation remained muted, suggesting the Federal Reserve could keep interest rates unchanged for a while. CPI increased 0.3% M/M in April, lifted by rising gasoline, rents, and health-care costs. Headline inflation has advanced 2% over the past 12 months while core in a on has risen 2.1%. Core PCE, the Fed’s preferred gauge, increased just 1.6% Y/Y in March, its smallest rise in 14 months. Benign inflation should provide monetary policy exibility for the Fed. According to the Fed Fund Futures, there is a 74% chance of a rate cut in 2019, including a 30% possibility for two. Fears over a protracted trade war with China and the fragile global economy may force the Fed to become more accommodative if there is significant spillover into the U.S. 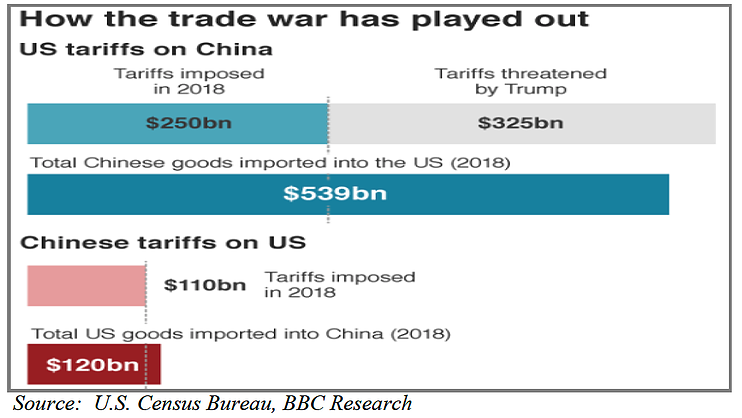 Manufacturing/Services weakened in April, but remain at healthy levels

Manufacturing activity in the U.S. grew for the 120th straight month in April although the rate of growth weakened. The ISM Manufacturing Index dropped from 55.3 in March to 52.8 in April with particular weakness in new orders, production and employment. Overall manufacturing conditions remain fairly healthy across the U.S. with the biggest concerns from survey respondents being the impact from tariffs and delay issues on the southern border with Mexico. The ISM Non Manufacturing Index grew at a slightly slower pace last month with weakness in the employment and prices components. The index declined from 56.1 in March to 55.5 in April and the lack of qualified employees was routinely cited by respondents. The manufacturing and services sectors remain healthy in the U.S. although the downward trend is something definitely to monitor given the uncertainty and major stock market declines in May.

Earnings decline for the first time since Q2’16, but have estimates become too pessimistic?

We are nearing the end of Q1 earnings with 90% of S&P 500 companies reporting. 76% of companies have reported better than expected earnings although the collective group has posted a growth decline of 0.5%. This is ahead of the 4% decline expectation at the start of the quarter and it would mark the rst Y/Y decline since Q2 2016. The decline in earnings was particularly poor amongst companies with more global exposure. Earnings are forecast to decline 1.7% in Q2, but return to growth in the second half of the year. 2019 earnings projections have come down further to just 3.3% growth. As expected, the worst sectors during Q1 have been energy, tech, communications and consumer staples. We believe the analyst community always overshoots with their estimates on the upside or downside.

Lower mortgage rates fueling a rebound in the housing market

New home sales jumped 4.5% in March to a seasonally adjusted annual rate of 692,000 units, the highest level since November 2017. It marked the third straight month of gains although February’s report was revised slightly lower. The housing market has benefited in recent months from the drop in mortgage rates. Sales plunged in the Northeast, but they gained ground in the South, Midwest and West regions. Inventories sit at 6 months to clear out the current supply and that is considered a healthy level. The median new home price fell 9.7% Y/Y in March. Existing home sales did not fare as well with a decline of 4.9% in March or 5.4% Y/Y. The supply/demand imbalance remains a major issue for this segment of the housing market with only 3.9 months of supply on the market. Year-over-year prices have also risen for 85 consecutive months.

Subdued activity in the eurozone continued in April with a noticeable difference between the manufacturing and services sectors. The IHS Markit Composite PMI fell to 51.5 in April from March’s level of 51.6. Manufacturing production fell for the third straight month and while the services sector posted a solid number (52.8), it was down from March. Activity increased in Germany and Ireland, but it weakened in Spain, France and Italy. Low inflaton in the eurozone is a function of weak demand and the manufacturing sector is in its steepest downturn since 2013. The services sector certainly looks healthier, but the survey suggests the economy is growing at just a 0.2% quarterly rate. It is encouraging to see improvement in the German engine, but economic data in the region remain weak and rising trade tensions could result in further weakness.

Accommodative central bank policy continues to support the global economy, but a protracted trade fight will have consequences for certain countries/economies 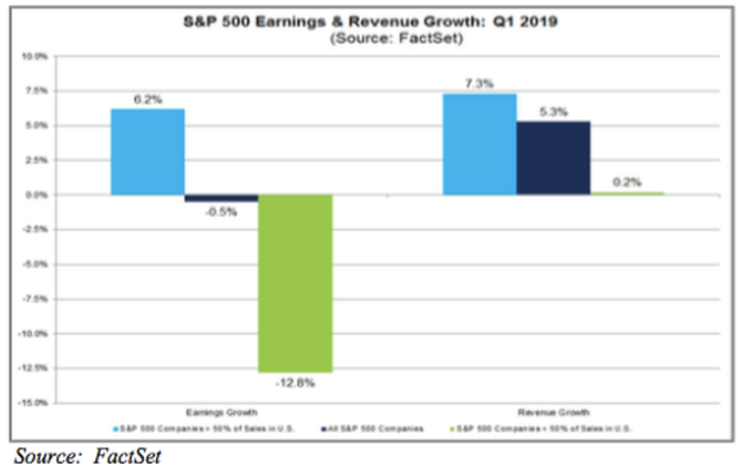 The global economy appears to have regained its footing, led by stronger than expected growth in the U.S., renewed QE in the eurozone and aggressive stimulus efforts by the Chinese government. Trade tensions between the U.S. and China have once again flared and that could impact the global economy if it becomes a protracted battle. President Trump appears willing to sacrifice some economic growth and market performance to achieve his goals. China seems to have recently taken a harder stance knowing Trump is facing re-election soon.

Equity markets have been very weak over the past few weeks and the hardest hit sectors have been those with the highest overseas exposure (tech, materials, energy, etc.). The Chinese economy is vulnerable as a protracted trade fight with the U.S. will likely lead to a slowdown in economic growth. Many countries will be hurt by a slowdown in China, but the most exposed countries are those with strong ties in the region. Countries like Singapore, Hong Kong, Russia and Korea are particularly vulnerable.