For the second consecutive quarter, the U.S. economy grew at a 3%+ annualized rate. The economy expanded 3% in Q3 based on the advanced reading, down from 3.1% in Q2. Economists were expecting 2.5% growth in Q3, largely due to the impact from the strong Hurricanes. Consumer spending grew 2.4% in Q3 (down from 3.3% in Q2), business investment surged 8.6% and exports gained 2.3%. Inventories also contributed 0.7% towards Q3 growth while detractors included residential investment (- 6%) and state and local government spending (-7.1%). After a slow start, GDP growth has clearly picked up in 2017 with full year estimates in the 2-2.5% range.

Employment in the U.S. rebounded in October after a disappointing September report that was hurt by Hurricanes Harvey and Irma. 261K new jobs were added to the economy in October (below the 310k estimate) and the August and September reports were revised higher by a total of 90k jobs. The unemployment rate fell to a 17-year low of 4.1% and the broader U6 unemployment rate plunged from 8.3% to 7.9% (lowest since December 2006). Average hourly earnings were unchanged in October and the annual growth rate fell back from 2.8% to 2.4%.

The ISM Manufacturing Index fell modestly in October to 58.7 from the 13-year high level of 60.8 in September. New orders, production, supplier deliveries and employment all eased in October, but the headline numbers suggest that manufacturing output growth is expanding at a 4% annualized rate. Stronger global growth and the weaker dollar have boosted the prospects for the manufacturing sector going forward. Construction spending rose 0.3% in September driven by a rebound in state and local government spending that offset a decline in private construction projects.

The ISM Non-Manufacturing Index increased from 59.8 in September to 60.1 in October. This was ahead of the 58.5 estimate from economists and the October reading was the highest since the index’s debut in 2008. The gauges on 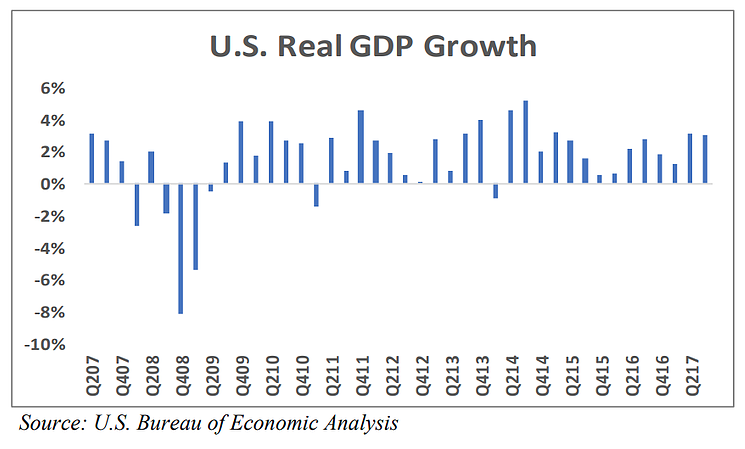 business activity and employment jumped higher last month, but new orders fell slightly. Based on the past relationship of the ISM NMI and the overall economy, the October reading corresponds to a 4.3% jump in GDP.

U.K. hikes rates for the first time since 2007, but divergence continues vs. the Eurozone

Despite the uncertainty over Brexit, rising inflation and a weakening economy, the U.K. still mustered better than expected growth in Q3. The economy grew 0.4% Q/Q or 1.5% Y/Y. Construction spending was weak for the second quarter in a row, but the service sector grew 0.4% and manufacturing increased 1%. In recent days, the EU cut its growth forecast for the U.K. from 1.8% to 1.5% for 2017. They believe the economy is expected to slow further to 1.3% in 2018 and 1.1% in 2019. This forecast is consistent with those from the IMF and OECD.

The Bank of England hiked rates for the first time since 2007 earlier this month to help control surging inflation. The weaker pound has imported inflation into the country and this has caused a slowdown in consumer spending. Wages are also stagnant, the housing market has cooled and the 3% inflation rate sits above the BOE’s target. Growth in the U.K. and the eurozone continues to diverge as one region falters and the other surges higher. U.K. GDP estimates are on the decline due to Brexit uncertainty, but the eurozone growth forecast has increased from 1.7% to 2.2% in 2017 with 2.1% growth expected in 2018. Spain is expected to grow by 3.1% in 2017, Germany by 2.2%, and France by 1.6%.

The eurozone grew 0.6% in Q3 or 2.5% Y/Y based on initial projections. This was down slightly from the 0.7% growth in Q2. Headline and core inflation fell slightly last month to 1.4% and 0.9% Y/Y, respectively, and the unemployment rate dipped further than expected to 8.9%. Although the most recent composite PMI from IHS Markit showed that output activity eased slightly to start Q4, it remained near peak levels over the past 7 years. New business activity was very strong and based on current PMI levels, 0.6-0.7% Q/Q growth should be expected.

Could China finally be showing signs of slowing?

Chinese inflation accelerated to 1.9% Y/Y in October from 1.6% in the prior month. Producer prices were unchanged at 6.9% Y/Y, above the 6.6% estimate. The official manufacturing PMI fell from 52.4 in September to 51.6 in October and the services PMI dropped from 55.4 in September to 54.3 in October. The smaller focused Caixin PMIs came in slightly above expectations. Property and construction activity, two of China’s key growth drivers, have slowed due to government measures to cool heated housing prices and higher borrowing costs.

91% of S&P 500 companies have reported Q3 earnings and the blended growth rate has been 6.1%, above the 3.1% estimate to start the quarter. Revenues have increased 5.8% in Q3 and 74% of companies have reported positive EPS surprises. The energy sector has led the way with 135% growth while financials (-8%) and utilities (-5%) have posted the largest decline in EPS. Analysts expect 9.4% EPS growth for all of 2017 and 11.1% growth in 2018. The number of companies beating expectations and the size of the EPS beats are above the 5-year average, but companies are once again not being rewarded by the market. Equities are priced for perfection and earnings appear to be already baked into the cake. It is positive for active management to see lower correlations between stocks.

U.S. corporations have spent some $3.8T repurchasing shares since 2009 and it has accounted for 40% of the total EPS growth. The figure jumps to 72% of EPS growth since 2012.

Earnings have grown 24% since 2012, but the figure falls to only 7% growth if share buybacks are removed. Based on a recent study from Artemis, the S&P 500 would be trading at a P/E ratio of 27X excluding the impact from share buybacks.

High share repurchase activity has made P/E multiples look more reasonable while other valuation metrics such as EV/EBITDA, P/S, and Schiller P/E sit at peak levels. Experts argue that the large presence of share buybacks has driven down volatility as there is always a buyer on weakness. Rising debt levels and higher interest rates are potential catalysts for slowing down the share repurchases that have been artificially supporting markets and suppressing volatility. 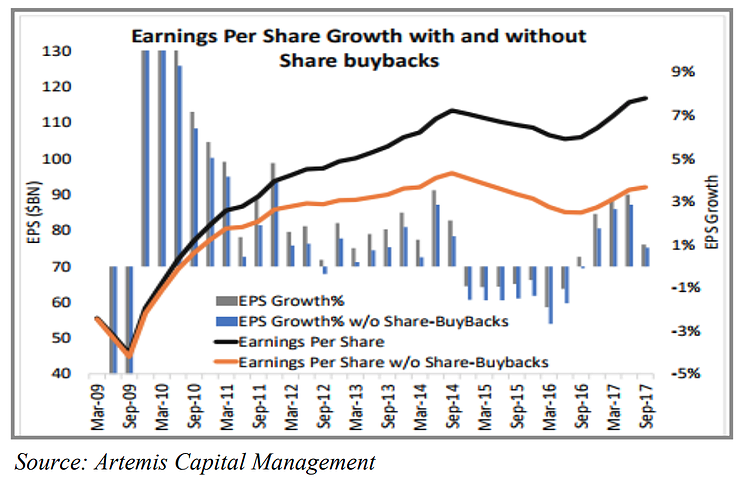