The U.S. economy grew at an upwardly revised 3.1% pace in Q2, up from the 1.2% rate in Q1. Growth is expected to slow in Q3 due to the impact from Hurricanes’ Harvey and Irma which are projected to cost the economy $167B according to Moody’s. Estimates for Q3 growth sit in the 1.5-2.5% range today, but the economy is expected to get a boost in Q4 as the hurricane rebuilding effort takes hold. Consumer spending increased 3.3% in Q3, business investment rose 7% and inventories were revised up by $5.5B

The Fed announced on September 20th that it will begin unwinding its $4.5T balance sheet. This ends a decade of policy-making experimentation, in which the Fed purchased vast quantities of Treasuries and mortgage-backed securities to help pull the U.S. economy from the brink of disaster. The Fed stopped its QE program in 2014, but purposely refrained from shrinking its balance sheet until it was sure the economy was on solid footing. The Fed will start off with small monthly reductions of $6B of Treasuries and $4B of MBS. It will gradually increase that to a maximum of $30B and $20B, respectively. Bonds will not be sold, but proceeds will no longer be reinvested.

The Fed holds about $2.5T of Treasuries which equates to about 18% of the market and it holds $1.8T of MBS which represents over 25% of the market. The rest of its $4.5T portfolio consists of such assets as swaps with foreign central banks, overnight loans of securities and foreign currencies.

Is wage pressure finally on the rise? Manufacturing/services remain robust

The U.S. economy shed 33k jobs in September, well below the +80k expectation. Despite the decline in the unemployment rate to 4.2% (16-year low), the September report was the first monthly decline in seven years. The July report was revised lower from 189k to 138k, but the August report was revised higher from 156k to 169k. Headline numbers from this report were essentially meaning 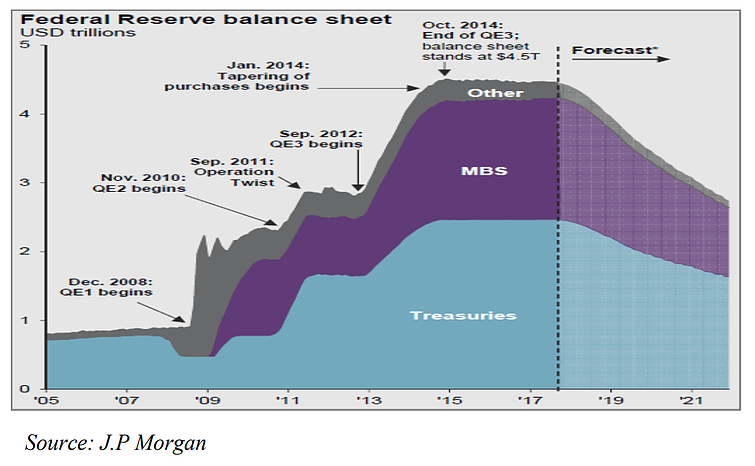 less due to the impacts from Hurricanes’ Harvey and Irma. The labor participation rate jumped to 63.1% and more importantly, average hourly earnings surged higher to an annualized rate of 2.9%.

The ISM Manufacturing Index surged higher in September to 60.8 (up from 58.8 in August), its highest level since May 2004. New orders rose from 60.3 in August to 64.6 in September and production increased from 61.0 to 62.2. ISM indicated that recent hurricanes caused supply chain and pricing issues in the chemical products sector and some disruptions in the food, beverage and tobacco industries. August construction spending increased 0.5% to $1.21T although July’s report was revised lower from a 0.6% decline to a 1.2% decline.

The ISM Non-Manufacturing Index jumped higher in September to 59.8 from 55.3 in August. Business activity, new orders and employment all registered increases during September. Recent hurricanes appeared to have little impact on the U.S services sector.

CPI jumped 0.5% in September as gas prices soared in response to Hurricane-related production disruptions. September’s gain was the largest in 8 months and it brought the annual rate up to 2.2% (from 1.9% in August). Core CPI rose a much tamer 0.2% M/M or 1.7% Y/Y. The Fed will likely view the gasoline driven rise in inflation as being temporary, but prices have firmed across many categories including the jump in wages. Core inflation is below their 2% target, but a December rate hike seems certain to keep the economy from overheating. The Fed is uncertain if low inflation is due to transitory factors or more persistent developments.

Durable goods orders rose 1.7% in August led by a rebound in the volatile aircraft segment. August’s advance followed a fall 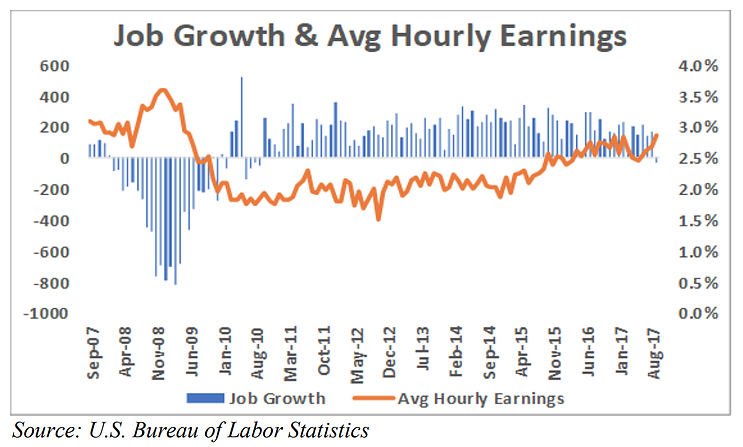 of 6.8% in July that was also driven by a 71% drop in orders for commercial aircraft. Core durable goods orders, a proxy for business investment, gained 0.9% after rising 1.1% in July. The stronger global economy combined with a slightly weaker dollar and rebound in energy has created demand for big ticket items.

Retail sales surged higher in September driven by a boost in demand for motor vehicles and building materials (impact from Hurricanes). Retail sales jumped 1.6%, the largest monthly increase since March 2015. Core retail sales increased 0.4% in September. Consumer spending appears to be in solid shape, especially when discounting the recent Hurricanes that have hurt the economy.

Eurozone continues to look very solid, U.K. falters, is Brazil finally out of the doldrums?

Eurozone GDP grew 0.6% Q/Q or 2.3% Y/Y in Q2, up from the 2% pace in Q1. Q2 marked the highest rate of growth since the debt crisis began and the economy in general has been keeping pace with the U.S. Economic growth has picked up and unemployment has fallen against the backdrop of low interest rates and other measures by the ECB to boost activity. September’s PMI also improved to a 4-month high along with consumer confidence, retail sales and unemployment. Growth has increasingly broadened and this helps make the upturn more sustainable as corporate profits, labor markets and demand improve.

The IMF recently slashed its economic outlook for the U.K. due to the weaker pound and weakening consumption trends. The U.K. economy grew only 0.3% in Q2 which was about half of the growth registered by the rest of Europe. The Brazilian economy grew more than expected in Q2 due to an upswing in consumer spending. GDP increased 0.2% Q/Q or 0.3% Y/Y. Inflation in Brazil has collapsed YTD and the central bank has slashed rates by 600 bps. 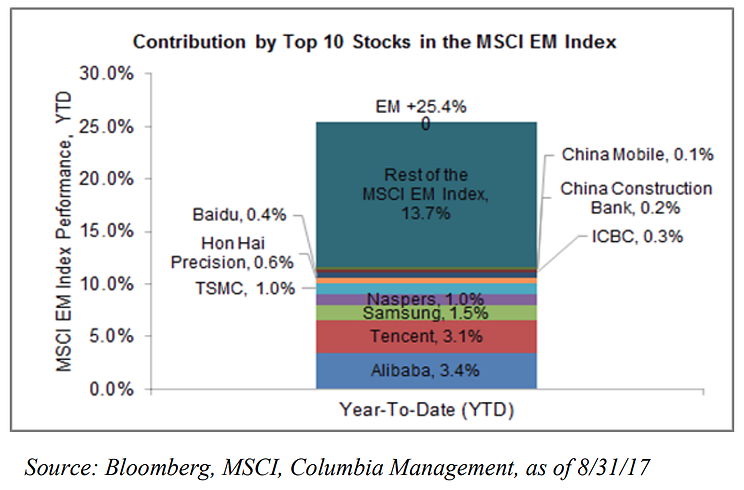 Watching EM valuations as tech has driven the 2017 rally

EMs have been the best performing asset class with a YTD gain of 28.1% for equities and 14.3% for debt. EMD spreads have become rather tight over the past 18 months and in many cases, yields are comparable to safer U.S. high yield. EM equity valuations appear cheap on the surface, but there are discrepancies as you peel back the onion. The broader benchmarks have forward P/E multiples of around 12.5X, but that includes many state-owned banks and energy companies that often trade with single digit multiples.

The tech sector has rallied 50%+ in 2017 led mainly by Chinese powerhouses Tencent, Alibaba and Baidu. The ecommerce/mobile theme has been red hot and many of these names dominate the top 10 holdings in the index. The top four names in the benchmark have contributed nearly 40% of benchmark gains in 2017 while the top 10 has contributed nearly 50%.