As many of you know, I am a student (and teacher) of investor behavior. I love that behavioral finance is not only endless, but that it repeats. I am constantly on the lookout for new ways to interpret investor behavior in current markets.

I recently read an article that referenced the 100th birthday party of famed television producer Norman Lear. At this party, he shared some of his wisdom with attendees. Although I wasn’t there, it was reported that he said there are two words the people don’t pay enough attention to; these are “over” and “next.” His point is that there is often a period when people don’t want to acknowledge or cannot see that something is over and that something next is coming. In sum, he appears to be saying that if one can shorten the time between “over” and “next” in a relevant situation, this is advisable for future success. When applying this concept to markets (not the subject of the article I read), it appears that investors would be well advised to recognize that the largest monetary and fiscal expansion period in history is ending, and that what is coming next is an economic slowdown, globally. However, there are constructive steps one can take to avoid typical investor mistakes during periods like this that repeat over time. If one looks at past investor behavior, when investors see negative economic or earnings news, panic selling often ensues. This is exactly the time when the opposite view should be in one’s mind.

As I have noted so many times over my career, my suggestion is to heed the words of Sir John Templeton who said that investors should “Be fearful when others are greedy, and greedy when others are fearful.” The reason for this is that even when it looks the darkest, there is likely to be light ahead. Over time equity markets go up. It is crucial to not get bearish as markets go lower during a panic. In the current market, the U.S. Federal Reserve will eventually stop raising rates. Inflation will eventually fall. Economic activity will expand. Furthermore, as we have noted many times, equity markets bottom well before the nadir in GDP growth or corporate earnings. As shown in the chart below, according to the University of Michigan Consumer Sentiment Index, the mood is pretty sour right now. The good news for investors is that when consumer sentiment has been this low, future equity market returns have been relatively good. 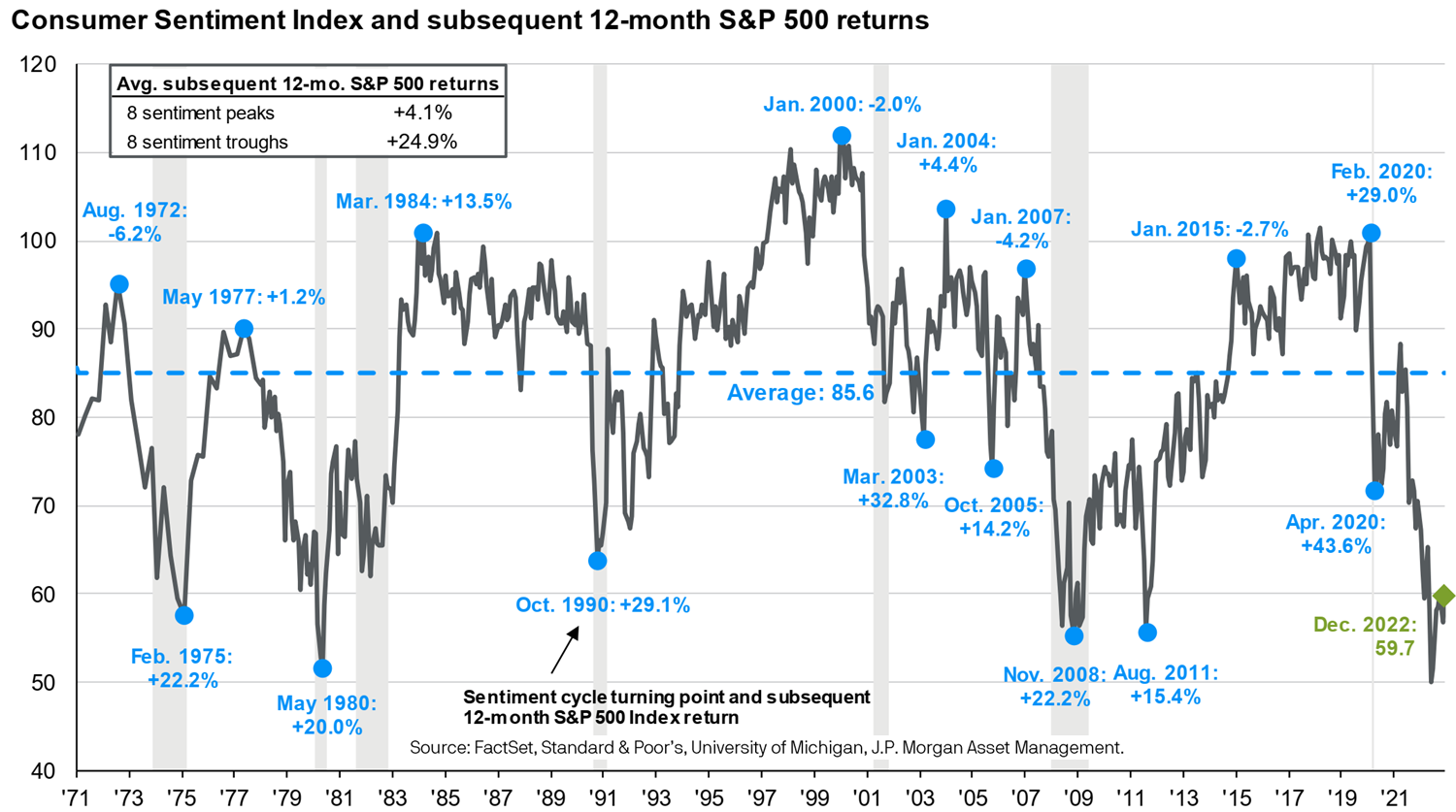 Therefore, it is important to rebalance portfolios should markets fall during 2023 due to a slowdown in earning that causes mass selling of equity securities. Please let us know if you have any questions or concerns about your portfolio.