Riders On the Storm 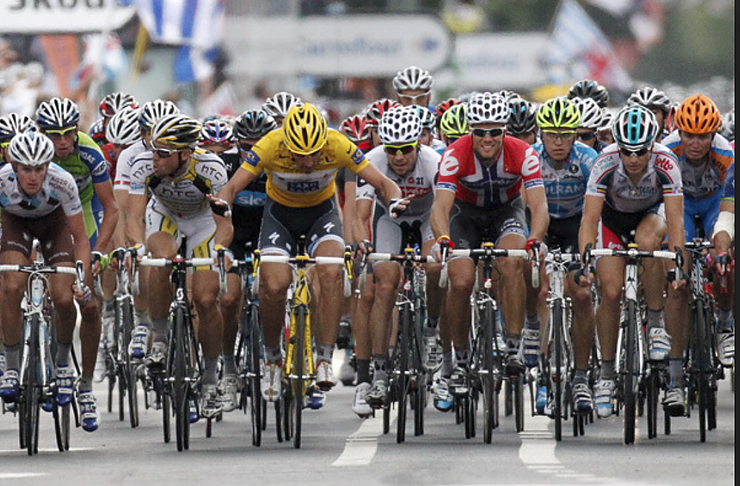 This month, I draw the investment analogy to cycling; it seems appropriate since we are in the throes of the 2018 Tour de France. For those who don’t pay much attention to this event, it is fantastic – full of spills and thrills and is, without question, one of the most grueling athletic achievements one can undertake. In the WSJ this week, I read an article entitled “Cycling’s Best Performance Enhancer: Riding in the Peloton”. The Peloton is the largest group of riders that appear in any leg of the race. The topic of the article centered around a research paper published in the Journal of Wind Engineering and Industrial Aerodynamics which says that riders in the “belly of a peloton” are exposed to 95% less wind drag than they would experience riding alone. The study proving this idea took a year and a half! In part this was because the 121-rider simulations involved three billion calculation points (the computer power needed was staggering) to reflect every dynamic right down to a 1-millimeter pocket of air that surrounds each rider. The results were confirmed by four separate wind-tunnel tests, including one that featured quarter-scale models of 121 cyclists in race positions. Amazing! But, with every “free lunch” comes risk (of course!). And in this case the risk is crashing. As anyone watching the Tour has seen, riders are shoulder to shoulder and are unable to see potholes or bumps in the road; they have to get out of their seat just to see over the front of the peloton. Even the smallest mishap can turn into a 40-man pileup.

As I read this article I started to think about the trend in passive investing and some of the things I’ve been reading about its potential risks. Similar to riding in the peloton, passive investing involves, typically, close to 95% less fee drag than investing in active management – of course depending upon which asset class. But is there a risk of a major pileup if we hit a bump in the road in the markets? The answer is we don’t know. We’ve never had this much money in passive investing. But there are concerns being proffered by market experts that we may need to take heed of. For example, Tim O’Neill, global co-head of Goldman Sachs’ investment management division, has said that if passive investing gets too big, the market won’t function. Here is an excerpt from a recent podcast he participated in:

Well, the promise of active investing is that they’re going to deliver performance net of fees better than the benchmark, whatever the benchmark might be for the US, global, or Europe. It’s been a difficult seven years for active investors because the markets have risen so consistently and persistently higher. So most active managers have net of fees underperformed the benchmark. So it led back to this debate about whether or not the fees that you pay for active managers are worth it. And there’s been simultaneously a great shift towards passive investing because it’s cheap, and you would get all of the market returns, net of five or 10 basis points. The problem for passive is that its size, at a certain point, may be too much for the market to handle. And it’s also all on autopilot. So in terms of the size, a market needs both active and passive investing because if everybody’s a passive investor, there’s no one to buy from. So there’s no one … your beta is my alpha and vice versa. So you need a balance in the market. And if passive becomes a certain oversized percentage of the market, the market doesn’t function.

And others such as Sanford C. Bernstein & Co. strategist Inigo Fraser-Jenkins say that the rise of passive asset management threatens to fundamentally undermine the entire system of capitalism and market mechanisms that facilitate an increase in the general welfare. Pretty heady stuff. The truth is that we don’t know or wont know if this is true until we have some evidence. In our view this is something to keep an eye on in the future. In the meantime investors will continue to ride in the peloton of the markets.

Goldilocks returns in June, U.S. economy firing on all cylinders with little sign of inflationary pressure

U.S. employers added 213,000 new jobs to the economy in June, topping the 195,000 expectation. More workers entered the labor force and as a result the unemployment rate rose from 3.8% to 4% as the labor participation rate increased to 62.9%. Perhaps the most disappointing part of the report was the lack of accelerating wage growth. Wages rose 0.2% M/M or 2.7% Y/Y and that fell short of expectations. The broader U6 unemployment rate ticked higher to 7.8%. Labor market conditions remain very tight by historical standards, but the lack of wage growth continues to be a mystery. Productivity helps explain the slow wage growth, but perhaps the broader U6 unemployment rate provides a more accurate picture of true labor market conditions.

The U.S. economy has shifted into high gear over the past few months after the first quarter’s soft patch. Most economists expect GDP growth to be near 4% in Q2. The economy feels very strong, consumers and businesses are showing a lot of confidence and by all accounts there appears to be a shortage of skilled workers necessary to fill openings. While the economy has shown no signs of overheating, the ingredients are certainly in place for a sustained pickup in inflation and wages.

U.S. manufacturing activity surged higher in June as tariff disruptions likely caused delays in supply chains and delivery schedules. The ISM Manufacturing Index jumped from 58.7 in May to 60.2 in June, led by a big increase in the supplier deliveries sub-component. New orders declined along with the employment sub-index. Respondents indicated that demand remains strong, but supply chains and employment resources continue to struggle. Manufacturers are also concerned about how their businesses are being impacted by tariff related activity. 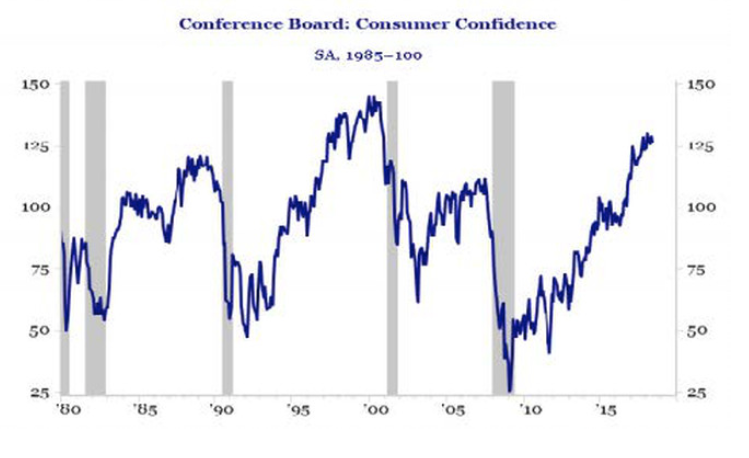 The ISM Non-Manufacturing Index grew from 58.6 in May to 59.1 in June. Business activity, new orders, and new export orders exhibited strength while employment, pricing and supplier deliveries weakened. Although businesses are optimistic about the economy and business conditions, they continue to cite concerns over tariffs, capacity constraints and delivery issues.

Durable goods orders fell more than expected in May with a decline of 0.6%, led by weakness in transportation equipment. Orders for non-defense capital goods excluding aircraft, a closely watched proxy for business spending plans, slipped 0.2% last month, but April’s reading was revised higher suggesting a slight uptick in business spending during Q2. Based on core capital goods shipments (used to calculate GDP equipment spending), a small contribution to Q2 growth is expected. Business spending remains supported by corporate tax reform, but uncertainty over trade continues to be an overhang.

Retail sales surged by 0.8% in May after an upwardly revised gain of 0.4% in April. This was well ahead of estimates and marked the third consecutive month of solid gains after weakness to start 2018. Gas receipts rose 2%, spending on building materials surged 2.4% and the so-called “core” retail sales increased 0.5%. Consumer confidence remains high and spending trends have really strengthened in Q2.

S&P 500 earnings are expected to grow 20% in Q2 based on the latest FactSet data. If earnings grow 20% in Q2, it will mark the second consecutive quarter of earnings growth above 20% and the third consecutive quarter of double-digit earnings growth. Actual earnings have outpaced estimates for at least 12 straight quarters and we believe this is likely to occur again in Q2. All 11 sectors are predicted to report Y/Y earnings growth with 7 expected to report double-digit growth. Energy, materials, telecom, and IT are projected to post the highest growth. Revenues are forecast to grow 8.7% in Q2 and for all of 2018, analysts are projecting earnings growth of 20.4%. Earnings are forecast to grow 10% in 2019 so Y/Y comparisons will become more difficult going forward. 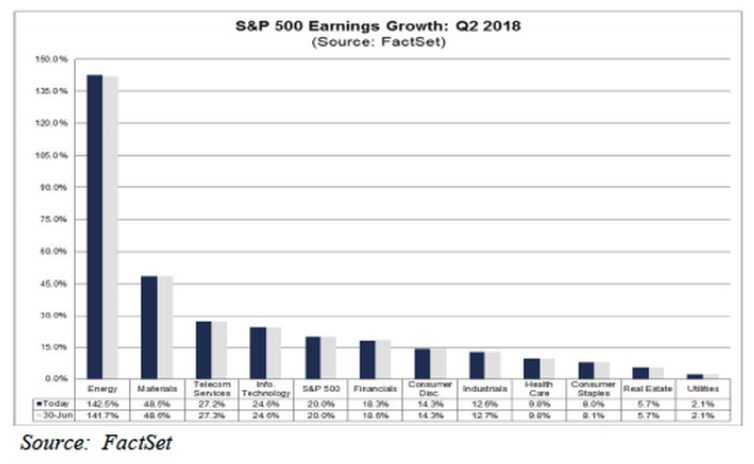 The eurozone economy regained some traction at the end of Q2 with the IHS Markit PMI rising from 54.1 in May to 54.9 in June. While the pace of activity has picked up in recent months, the region has failed to recover the momentum lost earlier in the year. Growth in the services sector jumped to a 4-month high, but this only partially offset manufacturing weakness which fell to an 18-month low. New orders and employment improved in June across the service sector, but tariff talk and rising political uncertainty has taken a bite out of manufacturing momentum. The latest data suggest that the eurozone economy grew 0.5% in Q2, a deceleration from prior quarters. 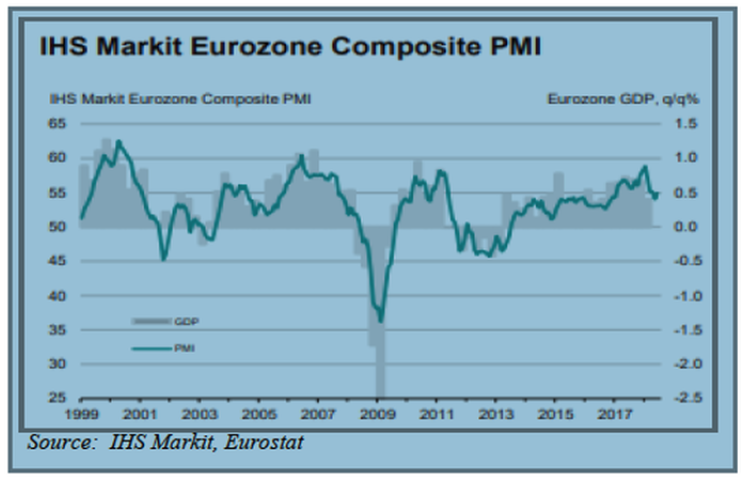 Manufacturing activity in China continues to expand, but the pace of growth fell modestly last month based on the official and Caixin Manufacturing PMIs. The official government PMI fell from 51.9 to 51.5 and the Caixin PMI declined from 51.1 to 51.0. In both reports, new export orders weakened, perhaps in response to the ongoing trade/tariff dispute with the U.S. Tariffs on $34B worth of Chinese goods took effect on July 6th and China responded immediately with its own list of U.S. goods. Service sector data showed that activity hit a 4-month high in June based on the 53.9 Caixin Services PMI reading (up from 52.9 in May). China’s official non-manufacturing PMI edged up to 55.0 in June from 54.9 in May.

Based on the latest Thomson Reuters I/B/E/S data, 2018 earnings are forecast to grow 15.9% in emerging markets led by Greece, India, Peru, Brazil and Russia. Latin America should see the strongest EPS growth across EM regions as many economies are benefiting from the rebound in commodities. Emerging Asia should see the second highest growth led by the consumption/rising middle class theme. China is a huge part of the benchmark and EPS are expected to grow 17% in 2018 and 16% in 2019. After a solid jump in earnings last year, EAFE earnings are only projected to grow 7% in 2018 and 2019. The deceleration in EPS is broad across Europe, Japan and Asia ex-Japan.