Employers added only 156K new jobs in August (expectation was 180K) as the pace of hiring slowed a bit from previous months. The unemployment rate ticked up from 4.3% to 4.4% and the June and July reports were revised lower by a total of 41K jobs. The broader U6 unemployment rate was unchanged at 8.6% and average hourly earnings only rose 0.1%. Wage growth, like inflation, appears to be stuck in the mud at an annualized growth rate of 2.5%. The job market has cooled in recent months and could present a challenge for the Fed who may be unwilling to raise interest rates again in 2017.

U.S. economic growth was revised higher to a 3% annualized pace during Q2, up from the 2.7% advanced reading. Q2 growth was up sharply from the 1.2% pace in Q1 and it marked the strongest quarter in nearly two years. Most of the upward revision was due to consumer spending which grew 3.3% versus the initial estimate of 2.8%. Spending came at the expense of savings, but growth was also boosted by stronger business spending (+8.8%) and a neutral impact from inventories. Estimates for Q3 growth are in the 3% range, but those are likely to be lowered due to the impacts from Hurricanes’ Harvey and Irma.

Inflation continues to be muted across the U.S. and most other regions of the world. The Fed’s preferred inflation gauge, the PCE Index, rose only 1.4% Y/Y in Q2, but August CPI showed a surge in inflation due to the jump in rent and gas prices. Inflation remains low across other developed markets excluding the U.K. and it is stable or falling in EMs. While the Fed and China have begun to tighten monetary policy, most other central banks remain accommodative with interest rates that are near historically low levels. The lack of inflation globally is a challenge, but until it becomes problematic there is no urgency to raise rates. Eurozone inflation sits at 1.5%, U.K. inflation is 2.6% and inflation in China is 1.4%. 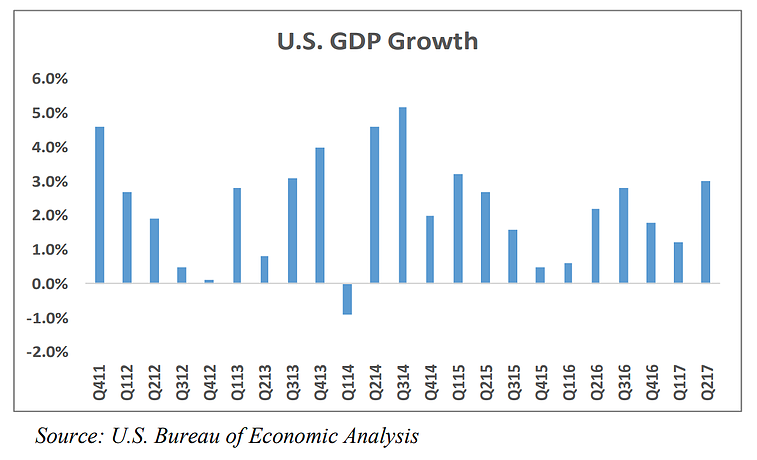 The U.S. manufacturing sector continued its resurgence in August with the ISM Manufacturing Index jumping from 56.3 in July to 58.8. This was the highest reading since April 2011 and it was well ahead of the 56.8 estimate. The underlying components of the report were strong, led by a surge in employment. New orders dipped slightly in August, but production strengthened. The only negative in the report was the weakness in new export orders given the weakening U.S. dollar and improved global growth picture. By all accounts, this was a strong manufacturing report, but we will await the impact from the two recent Hurricanes. The ISM Non Manufacturing Index rose from 53.9 in July to 55.3 in August led by a jump in employment, new orders and business activity.

Retail sales jumped 0.6% in July (+4.2% Y/Y) after rising by 0.3% in June. July’s increase was the largest in seven months as stronger spending on autos and other discretionary items suggested that the economy gathered some steam in early Q3. Core retail sales, which excludes autos, gasoline, food services and building materials, also surged 0.6% in July. Although wage growth remains somewhat subdued, consumer spending picked up in Q2 and appears to be chugging along thus far in Q3.

Economic output in the eurozone remained on solid footing in August as the IHS Markit Composite PMI was unchanged at 55.7. Based on the current trend, economic output in Q3 should be down slightly from Q2, but it should remain near peak levels since the financial crisis. Output accelerated in Germany and Ireland during August, but it fell slightly in France, Italy and Spain. Service sector activity fell to a sevenmonth low in August, but this has been offset by the solid rebound in manufacturing. The eurozone economy is projected to grow 0.6% in Q3 and approximately 2.1% in 2017.

The U.S. dollar has weakened substantially in 2017 after peaking after the November Presidential election. The USD Index has fallen over 10% YTD and small cap stocks have definitely seen the impact. Small caps have more domesticallyfocused businesses, thus their earnings and stock prices tend to do well during periods of dollar strength. The opposite is true during periods of dollar weakness when investors seek multinationals benefiting from stronger exports. Currencies often move in cycles and the era of the strong dollar (post financial crisis) could be over. As the dollar has weakened in 2017, large caps have outperformed small caps and non-U.S. equities have significantly outperformed U.S. equities due to the currency tailwind. Almost 9% of the MSCI EAFE YTD return has come from currency.

Financial markets are overdue for a pullback or correction. According to research from Deutsche Bank, a selloff of 3-5% in the S&P 500 has occurred on average about every 2-3 months. The current rally has gone nearly 10 months without even a 3% pullback, making it the third longest stretch since World War II. The only times the S&P 500 rally ran longer without a 3%+ selloff was in 1993 (11 months) and 1995 (1 year). 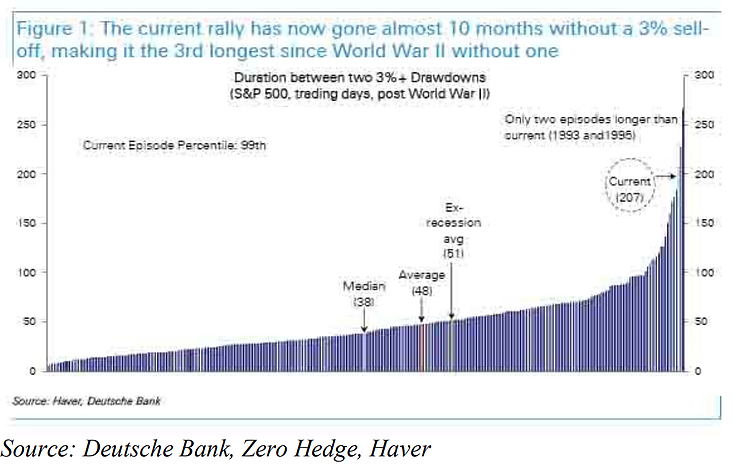 Is there anything cheap? Check out volatility

Valuations are stretched across equities and bonds globally with almost no pockets of value. EMs were cheap entering 2017, but EM equities have rallied 29.1% YTD and EMD has risen 16.6%. At the sector level, energy has fallen 13% while telecom has declined 12%. The energy sector continues to offer some value, but there is still uncertainty over production/output and where prices may head in the future.

Another dislocation in the market today is volatility which sits near historic low levels. As of 9/11/17, the VIX sits at 10.8 (long-term avg is 18) and there is a lot of complacency across markets when considering the numerous geopolitical issues flaring up, two catastrophic Hurricanes and the political mess in Washington. Markets continue to shrug off the noise, but we do believe that volatility will increase from current levels if nothing is accomplished in terms of tax reform. The debt ceiling and budget spending fights have been delayed another three months, but they have not gone away. Historically, the VIX has seen elevated levels from September through November. 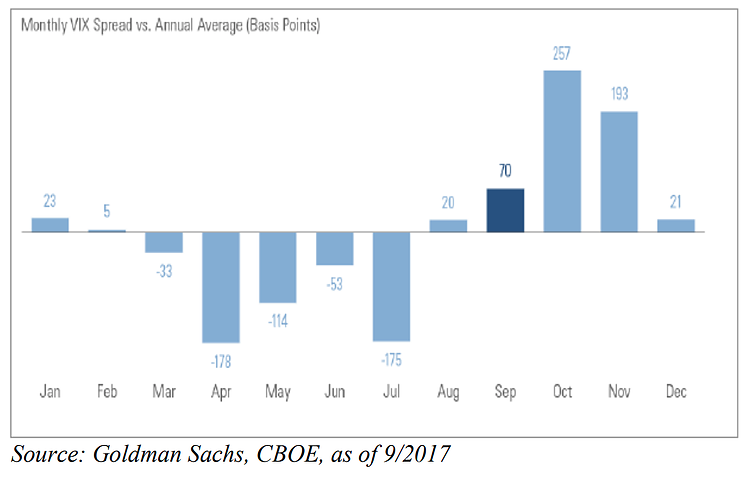