Strike while the Iron is Hot

As a full-fledged “middle ager”, I now have the right to start making observations about the younger generation. This, of course, is the same thing my parents did while observing me and my contemporaries when I was a teenager. And this phenomenon, as you know, has been going on for generations. The observation I am going to make in this note relates to idiomatic expressions. Phrases such as “hold your tongue” and “pulling your leg” and others seem to pop into my head often enough that I say them to my kids. However, they look at me like I’m nuts. What does that mean? It appears that the idiomatic expressions may be going the way of the dinosaur. But enough on that. When I read this week (as with many other weeks recently) that our president has decided to invoke yet more tariffs on those who were formerly our allies, the phrase “strike while the iron is hot” came to mind. Why, you ask? With the US economy so strong (economists have raised their growth estimates for the second quarter to an annualized rate of nearly 5 percent) this gives President Trump a stronger hand in trade maneuvers with China, Canada, Mexico, Europe and other trading partners, right? Well, yes it seems. For now. The United States is less exposed to the fallout from a trade war since our economy doesn’t rely as much on exports as some countries. But what happens when growth starts to cool? Disruptions to the global trade system could dampen the outlook right here at home not just in other countries. And as far as the markets are concerned trade remains front and center. Without question, the tariffs and counter-tariffs, ongoing posturing and uncertain outcomes have injected a jolt of volatility in the market. While this, among other factors including a stronger dollar, is proving disruptive to Emerging Markets and notably the equities market in China, the U.S. is holding up for now. In the end, I would prefer global trade negotiators accept President Trump’s offer made before leaving for the meeting with North Korean leader Kim Jong-un in which he suggested that G7 leaders “consider removing every single tariff or trade barrier on American goods” and said he would do the same “for products from their countries.” This approach would likely lead to continued global growth here and abroad.

Economy & labor market firing on all cylinders, but wage growth & inflation still not at worrisome levels

The May employment report was another Goldilocks scenario with strong job gains and only a slight pickup in average hourly earnings. The 223,000 new jobs add-ed to the economy were well ahead of the 185,000 estimate and the unemployment rate declined from 3.9% to 3.8% (lowest since April 2000). The labor participation rate dropped slightly during the month and aver-age hourly earnings grew 0.3% M/M or 2.7% Y/Y. The March and April reports were revised higher by a net of 15,000 jobs. This strong report makes a June rate hike all but certain as the Fed Fund Futures are pricing in a 96% chance along with a 76% chance for a September rate hike and a 45% probability for a 4th rate hike in December.

After a softer Q1, U.S. GDP growth is set to accelerate higher in Q2 based on economist projections. The Atlanta Fed is forecasting 4.6% growth in Q2 although that is much higher than the 3.5-3.8% estimates from most other experts. The economy appears to be firing on all cylinders with nearly full employment, benign inflation and strong consumer/business confidence.

Personal income rose 0.3% in April, a slight increase over the 0.2% rise in March. The national savings rate has fallen in recent years as consumer spending has strengthened. The savings rate was 2.8% in April and the Fed’s preferred gauge of inflation, the Core PCE Index, increased 0.2% M/M or 1.8% Y/Y. The latest CPI reading showed that inflation rose 2.8% Y/Y or 2.2% when excluding volatile food and energy. 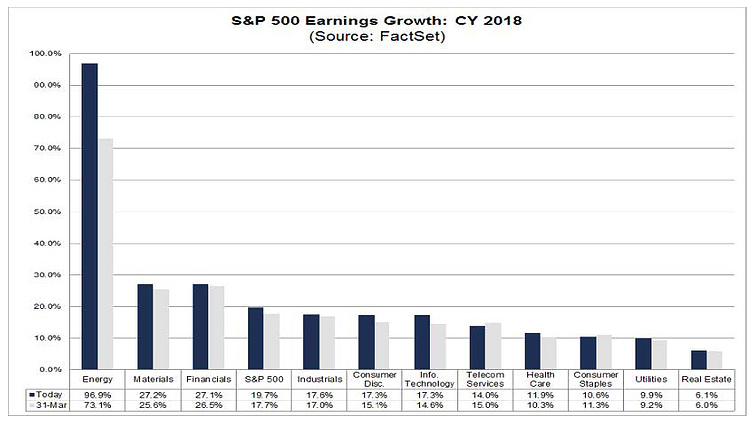 2018 earnings looking good, but concerns about 2019 comps; manufacturing/services power higher in May

Corporate earnings grew 25% in Q1, supported by an 8.5% jump in revenues. All 11 GICS sectors reported EPS growth of at least 8% and five reported growth above 20%. 76% of S&P 500 companies reported margin expansion in Q1, but guidance has been mixed for Q2 as market expectations have become perhaps too optimistic. 56% of companies issued negative guidance for Q2 compared to 44% which offered positive guidance. Guidance was particularly negative across real estate, financials, and the consumer sectors. Earnings are expected to grow 19% in Q2, 20% in 2018 and 10% in 2019. We have growing con-cern over recent optimism and more difficult Y/Y comps. The ISM Manufacturing Index increased from 57.3 in April to 58.7 in May. The ISM Non-Manufacturing Index rose to 58.6 in May from 56.8 in April. Production/business activity, new orders and employment all strengthened in May across both reports while new export orders weakened, perhaps due to the stronger USD.

Have the eurozone & Japan lost momentum?

Economic activity in the eurozone has soured in recent months with falling PMIs and signs of a slowing regional economy. The political turmoil in Italy has not helped matters with borrowing costs spiking higher. The latest PMI reading from IHS Markit showed a slowing in business activity, new order growth and employment. The survey also indicated that companies have become less optimistic about the outlook. Growth actually deteriorated in both manufacturing and services, down to 18- and 16-month lows, respectively. 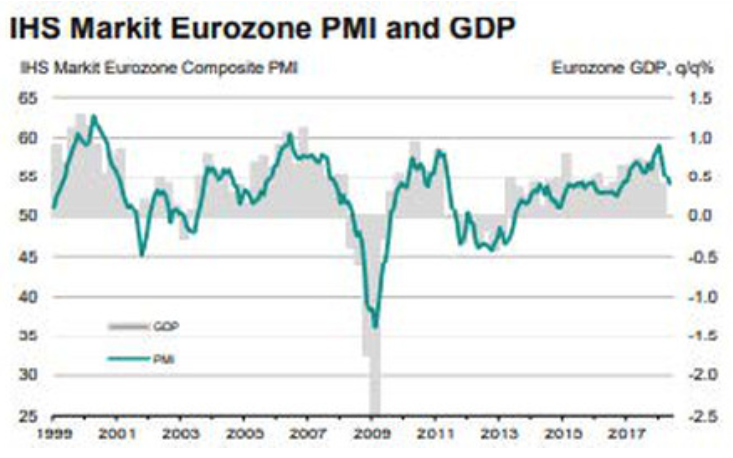 Some unusual circumstances such as extreme weather and holidays have been cited in recent months as rationale for the declining PMIs, but the key takeaway is that momentum in the eurozone is no longer accelerating. PMIs and other economic data still sit at healthy levels, but momentum has slowed, consistent with 0.4% Q/Q GDP growth. While eurozone growth has rebounded in recent years, the region has many moving parts and the recovery remains fragile. After eight consecutive quarters of growth, Japan’s economy finally contracted in Q1. Economists expected the economy to shrink at an annualized rate of 0.2% in Q1, but it actually fell 0.6%, driven mainly by weakness in domestic demand, business investment and exports. Export growth lost some of its momentum during Q1 while capital expenditures fell 0.1% and consumer spending dropped about 1%. Economists believe the economy should resume its moderate growth path once the tariff noise subsides a bit (impact on trade). Q4 GDP was also revised lower, a sign that the Japanese economy was starting to lose momentum at the end of 2017. This weakness could cause the 2019 sales tax increase to be delayed and it really shows the fragility of the economy despite the massive QE program in place.

The Chinese economy continues to outperform expectations based on the latest manufacturing and service sector PMIs. The official manufacturing PMI was 51.9 in May, up from 51.4 in April and the official services PMI was 54.9 in May, up from 54.8 in April. The strong readings are despite Some unusual circumstances such as extreme weather and rising trade tensions with the U.S. and the govern-ment’s focus on reigning in excessive risks in the economy. The smaller focused Caixin PMIs have also held steady at healthy levels. Inflation has trended lower in recent months to 1.8% per annum and April’s retail sales report showed 9.4% Y/Y growth. Tighter monetary policy from the Fed has resulted in a stronger dollar and general weakness in emerging market assets. EM currencies have weakened substantially in recent months while equities have sold off and credit spreads have widened. In most cases, fundamentals look healthy across most EM countries although there are some definite problematic ones like Turkey that is struggling with higher inflation and a widening current account deficit. A lot of USD debt has been issued in recent years and EM currency depreciation makes repayment more expensive.

The MSCI EM Index (and most EM countries) peaked on January 27th, consistent with the peak for the S&P 500. Since that date, the EM benchmark has fallen 12% with even worse performance from Turkey (-34.5%), Argentina (-34.2%), Brazil (-24.8%), Mexico (-18.6%) and India (-14.3%). The drawdown in EMD (local) has also been severe with a decline of 8.9% from peak to trough. The currency impact has been –308 bps in EM equities and –671 bps in EMD. While most other assets and regions have rebounded since the end of the selloff, EM assets continue to struggle. It is important to remember that EM equities are still up 15% over the past year. Returns should improve once investors refocus on the EM earn-ings and economic growth story and it is important to note that returns are much better in Asia. 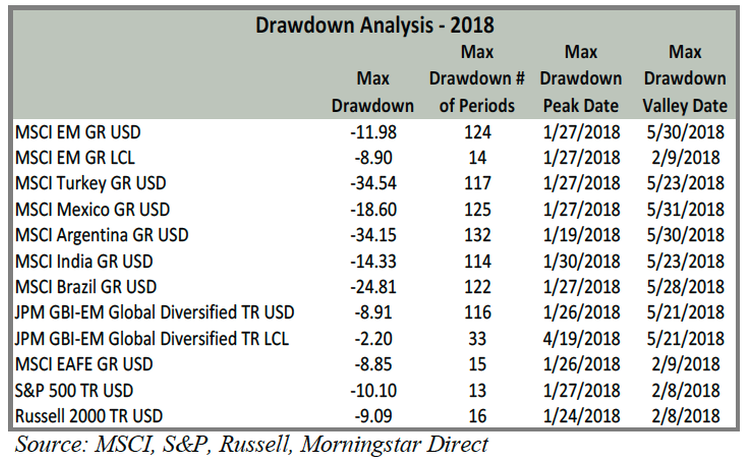