The Fed and Bubbles

For the past decade plus, central banks have had a strategy — essentially lowering the return of safe assets to increase demand for risky ones.  As history has shown, once that happens for an extended period, a bubble may eventually appear.  But the cost of not doing anything to aid the economy is even higher.  In today’s environment, do investors need to examine the potential for a brewing bubble?  On June 16, the Federal Reserve took the first steps to eventually normalizing its accommodative monetary policy.  However, the reality is that even with stronger-than-expected economic and inflation data, it made little change in the forecasts for the next two years.  It did say that the fed funds rate could rise in 2023 – the current “guestimate” being a rise to 0.6% from 0.1% – which sounds like a long time from now.   The larger question is the outlook for the Fed’s $120 billion in monthly asset purchases. Fed Chairman Powell said that they are starting to “talk about” the process of slowing the buying.  However, Mr. Powell noted that the Fed would give advance warning of when and how much they may slow their purchases.  One of the big factors in this conversation is inflation.  Mr. Powell is under the impression that the current 5% year over year inflation rate will be temporary; as supply catches up with demand the inflation rate should subside.  He similarly looks for job growth to improve as the Covid-19 effect recede.   With all this said, the Fed has not really tightened monetary policy.  And for the moment, what this means is that risk assets are likely to continue rising, all things being equal.  It is crucial that investor pay attention to forward PE ratios to determine if a bubble forms because the high forward PE below is primarily justified by historically low interest rates.  We will keep you informed on this issue going forward. 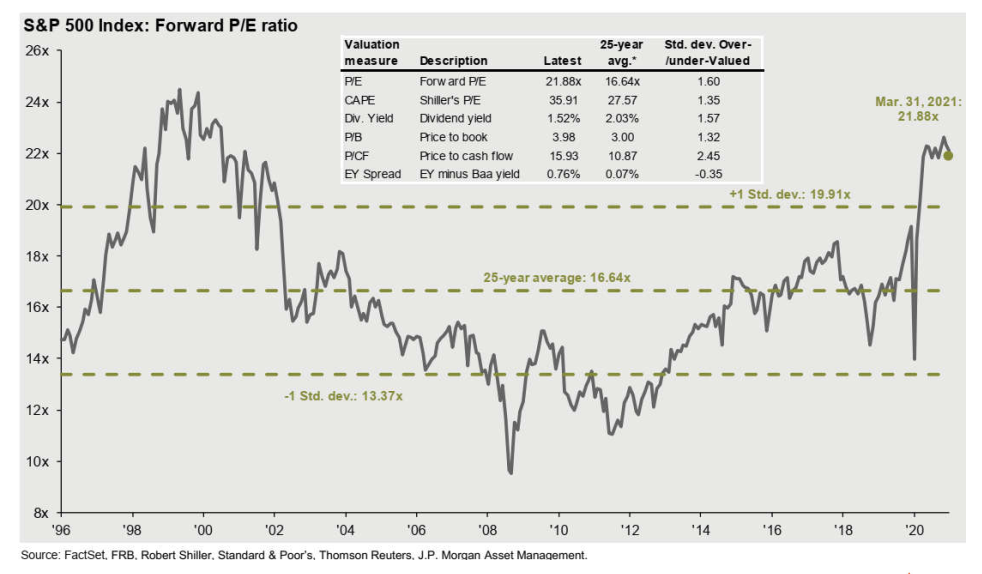