The US Economic Data Continues to Demonstrate Strength

The ISM Manufacturing Index fell in July to 58.1 from 60.2 in June. Manufacturing activity remained in very strong shape despite the modest decline. New orders and production both grew at a slower pace in July, but the employment sub-component increased slightly. Export orders and the prices component also softened a bit last month. Businesses continued to express concern over the impact from trade/tariff uncertainty. All in all, the manufacturing sector in the U.S. has seen a significant renaissance, but there is growing pressure on supply chains and the pool of available skilled labor.

The ISM Non-Manufacturing PMI index for the United States fell to 55.7 in July of 2018 from 59.1 in June, well below market expectations of 58.6. It is the lowest reading since August of 2017. Slowdowns were evident in production, new orders, new export orders, backlog of orders and supplier deliveries. The employment reading strengthened along with imports. Although most firms remain positive about business conditions and the economy, tariffs and deliveries are an ongoing concern. 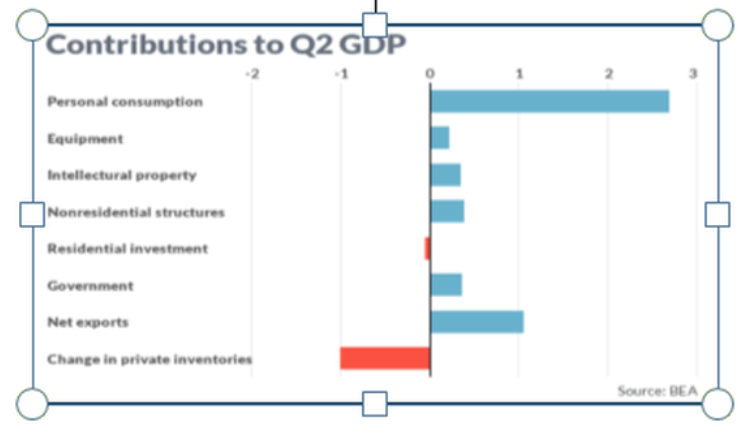 Consumer spending surged 4% in Q2 based on the recently released GDP report and this was consistent with strong retail sales trends over the past few months. Retail sales increased 0.5% in June and this follows an upwardly revised 1.3% in May. June’s gains were driven by a spending boost on autos, gas stations and building materials. Receipts at clothing stores fell 2.5%, the most since February 2017. The so-called “core” retail sales were flat in June after growing 0.8% in May. Retail sales have increased 6.6% Y/Y.

Inflation appears to be mostly contained in the U.S. based on the latest Personal Consumption Expenditures reading. The PCE Index increased 0.1% in June to an annualized rate of 2.2% while the Core PCE Index rose 0.1% to an annualized rate of 1.9%. CPI Inflation has jumped 2.9% Y/Y and Core CPI has increased 2.3%. Economists expect CPI to tick up to 3% in July while Core CPI should remain flat at 2.3%. The Fed’s willingness to allow inflation to run slightly hotter than their 2% target should allow them to maintain their cautious monetary policy approach.