Will manufacturing drag down the Eurozone? ECB to the rescue again!

Blog      Financial & Market News      Will manufacturing drag down the Eurozone? ECB to the rescue again! 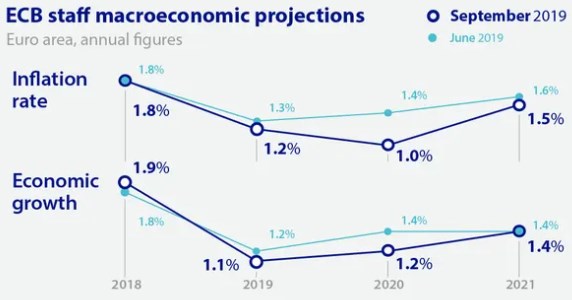 The IHS Markit Composite PMI ticked higher in August led by unexpected strength from France and Spain. The PMI increased from 51.5 in July to 51.9 in August, with significant
divergence between the manufacturing (PMI at 47) and services sectors. Similar to the rest of the globe, consumer spending has propped up the services sector while trade tensions have fueled a sharp manufacturing downturn (especially in Germany). The latest PMI reading suggests that Q3 GDP growth will be around 0.2% Q/Q. Consistent with other key regions, the key question is how long the divergence between manufacturing and services can
continue before one drags down the other (and the broader economy).

As expected, the ECB has come to the rescue again with new stimulus. On September 12th, the ECB announced a 10 bps cut to the already negative deposit rate (to –0.50%) along with a new bond buying program that will entail €20B per month of asset purchases for as long as it deems necessary.The new QE program will start in November with the goal of
spurring bank lending and overall economic activity in the region. The ECB also slashed its growth and inflation forecasts based on a deterioration in economic conditions.