Will The War In Ukraine Exacerbate The Decline of Globalization?

Blog      Financial & Market News      Will The War In Ukraine Exacerbate The Decline of Globalization?

When I was in business school in the 1990’s, the buzzword of the day was “globalization”. To me, it made perfect sense. Why wouldn’t the world be interconnected and try to do commerce globally instead of each country trying to take on the world? And globalization took off. And then, in the 2010’s, there began chatter that globalization was falling apart. Disintegrating. Huh? Why would this happen? This did not make sense to me – after all the integration that happened over the past two decades, why would this suddenly stop? Yes, the GFC of 2008-9 and covid 19 put up challenges to global trade and capital flows – but, according to the shipping company DHL, who does a global interconnectedness study every year, global integration is alive and well. “Trade in goods bounced back quickly in mid-2020 and even surpassed pre-pandemic levels by the end of the year. By early 2021, global trade volumes set new records.” [1] What gives? Well, number one, it turns out that it isn’t as bleak a picture as many may thought. And, number two, the current war in Ukraine is demonstrating that globalization still exists. But there are challenges. 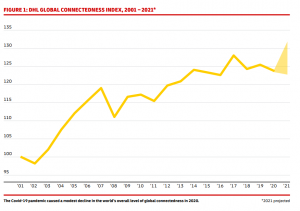 From the pro-globalization view, for example, the integration of global markets enabled the West to punish the Russian economy in response to Putin’s aggression. A calculus in Russia might have been a potential for a lack of unity in Europe. However, Europe has remained united, likely because political and economic institutions underlying European postwar prosperity are still reasonably strong. Perhaps paradoxically, the war may have strengthened European countries’ ties. It turned out that institutions such as NATO, the U.N., and the IMF are a binding force.

Another part of the equation is currency reserves; the world’s central banks hold about 60% USD and 20% Euros. Although China is likely to be a force to be reckoned with overtime, currency-wise they are not a factor now. The war in Ukraine is demonstrating that the world is still largely integrated. However, there are likely to be long-lasting effects from this war in terms of new global alliances and challenges to western-style democracy. The current sanctions are likely to make some countries want to lessen their reliance on US Dollar reserves. For example, both China and Russia have been working to reduce their reliance on the dollar; Yuan settlements were already up to 28% of Chinese exports to Russia in 2021 from just 2% in 2013. According to one Chinese chamber of commerce leader, “Yuan-Ruble settlement has become a normal business at major banks nowadays … We business people are already accustomed to that,” 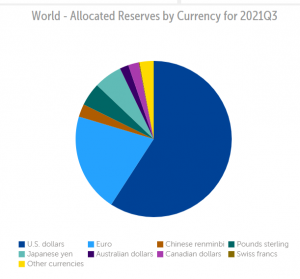 Over the past 5+ years, the world has moved to a more isolationist posture and conversations about the tenuousness of democratic institutions have increased.

Globalization has taken a back seat to geopolitical rivalry and global uncertainty. While Mr. Putin displayed uneasiness with the EU and NATO, the Western countries have spent more time looking inward. Countries like China and Russia pulled back from liberalism and moved toward autocracy. Examples include President Trump imposing tariffs on aluminium and steel imports and hitting China with a ban on access to technology. China’s stiff-armed Australia on trade due to political quarrels related to Covid-19 and the Taiwan situation. More recently, President Biden, along with China and Europe are offering subsidies to local manufacturers in the name of national security. The World Trade Organization has been unable to curb these protectionist policies. However, the global community’s embrace of sanctions against Russian oligarchs gives hope of more coordinated efforts.  It is possible that the invasion of Ukraine will demonstrate that tyrants like Putin are unwelcome in the global community. The final impact on global trade and the value of the US dollar remain to be seen. We will keep you advised as events unfold.