I read some statistics lately and started thinking about whether we are in another 2000 type stock bubble.  In some ways yes, in some ways no.  Consider:

The top five largest tech stocks (FAAMG): Facebook, Apple, Amazon, Microsoft, and Google-owned Alphabet –make up about 22% of the S&P 500 market capitalization.   Apple is worth $2 trillion by itself. It’s the first U.S. company with a $2 trillion market cap and is worth almost a quarter of the European stock market. Let that sink in.  The top 5 companies in the S&P 500 account for almost 1.5x the market capitalization as the bottom 300 stocks, a record disparity.

Similar to the 1990’s, the Fed is supporting conditions that set the stage for a 2000 type stock bubble.  It has pumped trillions of dollars into the economy, expanding its own balance sheet to more than $7 trillion from $4.1 trillion at the start of 2020. This time, its asset purchases have included not only US Treasuries and mortgage-backed securities, but also investment-grade and some high-yield bonds. And interest rates at near zero.  This has caused the FAAMG stocks to rise more than 35% year-to-date. By comparison, an equal-weighted (vs. market cap-weighted) basket of S&P 500 constituents, excluding the five mega-caps, is roughly flat from its March lows.

When the history books were written on the 2000 bubble, a key culprit was the Y2K – the idea that there was going to be a lot of technology spending on fixing the changeover in year from 1999-2000.  This turned out to be a non-issue really.  In other words, there was a widespread belief that a new paradigm had taken hold, requiring an adjustment in valuations far beyond what previous fundamentals would suggest.

This belief took hold of the psyche of investors beyond Wall Street, and there was capital available to move stock prices higher and higher.   Are we in a similar paradigm now?  It appears so.  The shutdown of the regular economy and the shift to working from home has accelerated the gains in a few technology stocks that are uniquely capable of thriving in the current environment.  Look at the chart below which compares the Nasdaq 100 to the S&P 500. 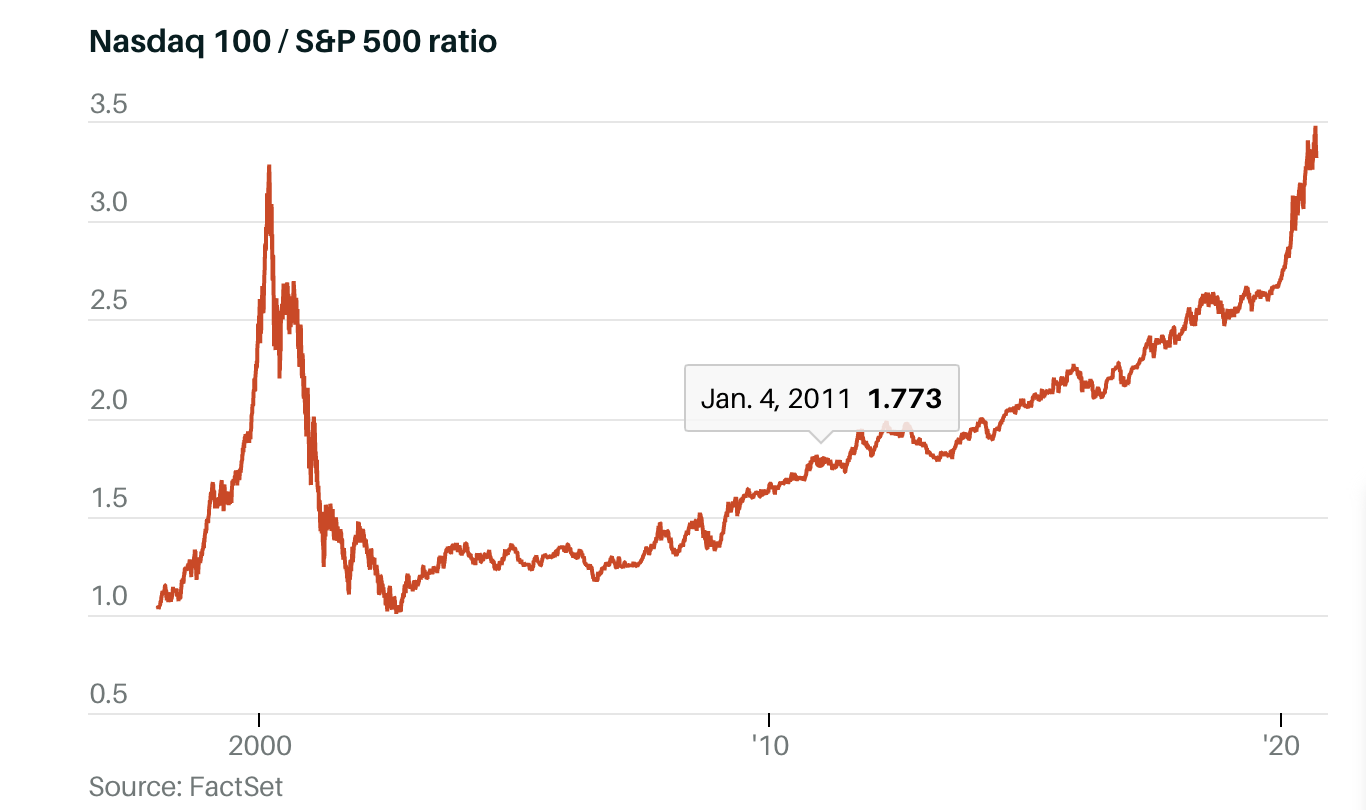 On the other hand, the S&P 500 peak valuation during the 2000 bubble topped out at over 24 times forward earnings.  Currently, we are at approximately 21 times forward earnings.  This is above the last 25 year average of 16.6 times but not in the nosebleed territory of the year 2000.  Reiterating a point from last month, a key difference between then and now is that in 1999-2000, interest rates on the 10-year US Treasury Bond were between 4.5% and 6.5% (compared to 0.7% today) so there was a viable alternative to equities.

In addition, during that time, the Fed typically took steps to control a potential bubble by raising interest rates.  Current Fed Chairman Powell has explicitly stated that he intends to keep rates low for many years, which means there should be plenty of capital to potentially keep a bubble growing indefinitely.  But there are risks, such as uncertainty around the upcoming election, and the possibility that Congress may fail to pass another relief package.

In the meantime, we encourage investors to maintain vigilance and stick to their target allocation policies.  It should be an interesting end to the year 2020.  Please reach out to us if you would like to discuss the role of technology stocks in your portfolio.